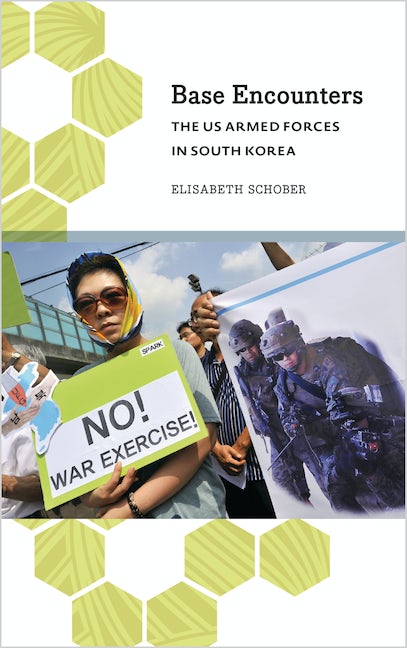 The US Armed Forces in South Korea

Ethnographic introduction to the social, economic and political factors that have contributed to tensions on the ground over US bases in South Korea
Base Encounters explores the social friction that US bases have caused in South Korea, where the entertainment districts next to American military installations have come under much scrutiny.

The Korean peninsula is one of the most heavily militarised regions in the world and the conflict between the North and South is continually exacerbated by the presence of nearly 30,000 US soldiers in the area. Crimes committed in GI entertainment areas have been amplified by an outraged public as both a symbol for, and a symptom of, the uneven relationship between the United States and the small East Asian nation.

Elisabeth Schober's ethnographic history scrutinises these controversial zones in and near Seoul. Sharing the lives of soldiers, female entertainers and anti-base activists, she gives a comprehensive introduction to the social, economic and political factors that have contributed to the tensions over US bases in South Korea.

'A very powerful book which deserves a broad readership. Eloquently written, ethnographically rich and theoretically sophisticated' - Thomas Hylland Eriksen, Professor of Social Anthropology at the University of Oslo, and author of 'Small Places, Large Issues' (Pluto, 2015) 'An excellent contribution to social anthropology and military sociology collections ... Highly Recommended' - CHOICE 'With lucid analytic prose and vivid storytelling, Elisabeth Schober shows us that the relationship between the US military and the people of South Korea is much more complex than many previous accounts let on' - Catherine Lutz 'An excellent starting point for anyone interested in how the geopolitical ROK-US relationship plays out in the everyday lives of Koreans and the young Americans sent to 'Freedom's Frontier' - The Asia Pacific Journal of Anthropology
List of Figures
Series Preface
Notes on the Text
Notes on Transliteration
Acknowledgements
1. Introduction: Violent Imaginaries and Base Encounters in Seoul
2. Capitalism of the Barracks: Korea’s Long March to the Twenty-First Century
3. 'The Colonized Bodies of Our Women...': Camptown Spaces as Vital Zones of the National Imagination
4. Vil(l)e Encounters: Transnational Militarized Entertainment Areas on the Fringes of Korea
5. It‘aewon's Suspense: Of American Dreams, Violent Nightmares and Guilty Pleasures in the City
6. Demilitarizing the Urban Entertainment Zone?: Hongdae and the U.S. Armed Forces in the Seoul Capital Area
7. Conclusion: Seeds of Antagonism, Children of Discord
Notes
References
Index
Published by Pluto Press in Apr 2016
Paperback ISBN: 9780745336053
Hardcover ISBN: 9780745336107
eBook ISBN: 9781783717712

Violence in the Pacific: The impact of the US military in South Korea

Elisabeth Schober explores the effects of violence, sexual or otherwise, that occurs around the extensive network of US military bases in South Korea.

END_OF_DOCUMENT_TOKEN_TO_BE_REPLACED
Back to Top
X