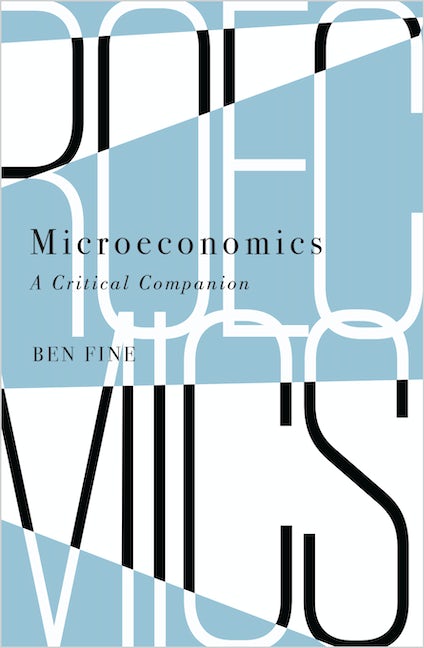 From the culmination of 40 years of teaching, research and policy advice on political economy, Ben Fine critically exposes the methodological and conceptual content of dominant microeconomic models without sacrificing the technical detail required for those completing a first degree in economics or entering postgraduate study. The result is a book which is sure to establish a strong presence on undergraduate reading lists and in comparative literature on the subject.

'A thorn in the side of mainstream economics' - Steve Keen, author of Debunking Economics (Zed, 2011) 'An accessible and rich resource for those who appreciate critical and creative approaches. This and its companion macroeconomics volume contain numerous valuable insights for the serious student of economics' - Stuart Birks, head of the World Economics Association’s Textbook Commentaries Project, author of Rethinking economics: From Analogies to the Real World (Springer, 2015) and 40 Critical Pointers for Students of Economics (WEA Press, 2015) 'These wonderful volumes are what many teachers and students of economics have been waiting for - textbooks that are logical, critical, accessible and relevant' - Professor Jayati Ghosh, Jawaharlal Nehru University 'Ben Fine has written the book that I wish I could have read as a graduate student. Its insightful critiques of mainstream theory will be even more important to those of today's generation of students seeking to cast off the intellectual blinders from their training' - Rod Hill, University of New Brunswick and co-author of The Economics Anti-Textbook: A Critical Thinkers Guide to Microeconomics (Zed, 2010) 'An invaluable antidote to the conventional poison of marginalism and general equilibrium theory in microeconomics; and Say's law and the denial of crises or slumps in macroeconomics' - Michael Roberts 'Ben Fine has done a splendid job of critically challenging the microeconomic foundations of the new conventional wisdom in a manner accessible to intermediate level students of economics' - Jomo Kwame Sundaram, former United Nations Assistant Secretary-General for economic analysis (2005-2015), recipient of Wassily Leontief Prize for Advancing the Frontiers of Economic Thought (2007)
List of Boxes
List of Diagrams
Preface, Preliminaries and Acknowledgements
1. Locating Microeconomics
2. Elusive Consumers and the Theory of Demand
3. From Production to Supply and Beyond to General Equilibrium?
4. Competition Is as Competition Does?
5. Production Function Rules, Not OK
6. Labour Markets
7. Whither Microeconomics: Upside-Down or Inside-Out?
References
Index
Published by Pluto Press in Apr 2016
Paperback ISBN: 9780745336077
eBook ISBN: 9781783717804