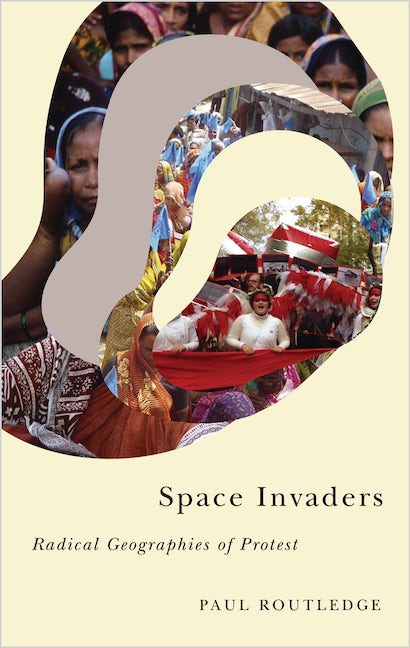 A history of global protests and social movements from the perspective of radical geography
Space Invaders argues for the importance of a radical geographic perspective in enabling us to make sense of protests and social movements around the world. Under conditions of increasing global economic inequalities, we are witnessing the flourishing of grassroots people's movements fighting for improved rights.

Whether it be the alter-globalisation mobilisations of the turn of the century, the flurry of Occupy protests, or the current wave of anti-austerity mobilisations taking place, there is a geographical logic to all forms of protest whether that be through transforming landscapes, occupying enemy territory or developing solidarity and communication networks.

Paul Routledge takes a primarily auto-ethnographical perspective, drawing upon his extensive experience over the past thirty years working with various forms of protest in Europe, Asia and Latin America, to provide an account of how a radical geographical imagination can inform our understanding and the prosecution of protest.

Paul Routledge is Professor of Contentious Politics and Social Change at the School of Geography, University of Leeds, and author of Space Invaders (Pluto, 2017), Terrains of Resistance (Praeger, 1993) and Global Justice Networks (MUP, 2009).

We are all Space Invaders now

As the world around us descends into permanent crisis, Paul Routledge looks to indigenous struggles, Black Lives Matter and LGBTQ activism, to understand how we use space and place in the fight for a better world.

What is Radical about Geography?

Danny Dorling asks: from the history of the Cold War, to the peril of the 2008 financial crash, what impact could a radical geography have in shaping political and social activism?

END_OF_DOCUMENT_TOKEN_TO_BE_REPLACED
Back to Top
X