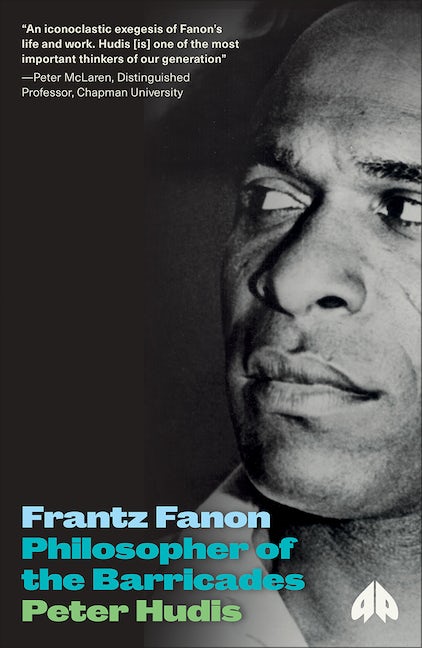 Philosopher of the Barricades

A radical biography of the author of the classic anti-colonial text Black Skin, White Masks.
Frantz Fanon (1925-1961) was a Caribbean and African psychiatrist, philosopher and revolutionary whose works, including Black Skin, White Masks and The Wretched of the Earth are hugely influential in the fields of post-colonial studies, critical theory, and post-Marxism. His legacy remains with us today, having inspired movements in Palestine, Sri Lanka, the US and South Africa.

This is a critical biography of his extraordinary life. Peter Hudis draws on the expanse of his life and work - from his upbringing in Martinique and early intellectual influences to his mature efforts to fuse psychoanalysis and philosophy and contributions to the anti-colonial struggle in Algeria - to counter the monolithic assumption that Fanon's contribution to modern thought is defined by the advocacy of violence.

He was a political activist who brought his interests in psychology and philosophy directly to bear on such issues as mutual recognition, democratic participation and political sovereignty. Hudis shows that, as a result, Fanon emerges as neither armchair intellectual nor intransigent militant.

Peter Hudis is Professor of Philosophy and Humanities at Oakton Community College and author of Marx's Concept of the Alternative to Capitalism (Brill, 2012) and Frantz Fanon: Philosopher of the Barricades (Pluto, 2015). He edited The Rosa Luxemburg Reader (Monthly Review Press, 2004) and The Letters of Rosa Luxemburg (Verso, 2013).

'An iconoclastic exegesis of Fanon's life and work. In what is sure to become a classic text, Hudis shows himself to be one of the most important thinkers of our generation' - Peter McLaren, Distinguished Professor in Critical Studies at Chapman University 'If you are new to Fanon or you are returning to his work, Peter Hudis' biography is a must read!' - Lenore Daniels, PhD, theorist, writer, activist 'A lively and provocative reading of Fanon's life and work that challenges many of the more recent interpretations of this major figure' - Paget Henry, Professor of Sociology at Brown University 'A wonderful introduction to the life and work of Frantz Fanon' - Morning Star
Acknowledgements
Introduction: Fanon in Our Time
1. The Path to Political and Philosophical Commitment
2. Self and Other: The Dialectic of Black Skin, White Masks
3. The Engaged Psychiatrist: Blida and the Psychodynamics of Racism
4. The Engaged Philosopher: The FLN and the Algerian Revolution
5. The Strategist of Revolution: Africa at the Crossroads
6. Toward a New Humanity: The Wretched of the Earth
Notes
Index

Peter Hudis discusses the contemporary relevance of Frantz Fanon for intersectional discussions of race and class.

Frantz Fanon for Our Times: Reflections on Fanon’s Biography

Tithi Bhattacharya reviews Peter Hudis’ biography of Frantz Fanon, examining his relationship with the Soviet Union, his war against colonial powers and his faith in the working class.

What does Trump mean for the Future of Global Capitalism?

Peter Hudis considers what Trump’s racism, sexism and nativism, could mean for the future of global capitalism.

END_OF_DOCUMENT_TOKEN_TO_BE_REPLACED
Back to Top
X