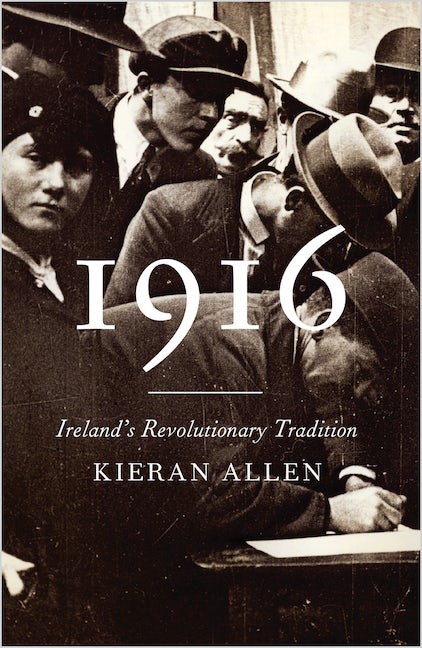 This history of modern Ireland follows the thread of 1916's 'revolutionary tradition' as it has unravelled across the century.
A few minutes after noon on the 24th April, 1916, Patrick Pearse stepped outside the newly occupied GPO on Sackville Street with a copy of the Proclamation of the Irish Republic. Reading aloud, he declared a strike for Irish freedom against the world’s greatest imperial power.

The Easter Rising, as the six days of intense, bloody fighting that followed came to be known, set the course for the next 100 years of Irish history; the ‘Heroes of ‘16’ becoming a national cultural and political touchstone down the generations. But today, canonised and mummified, the radical visions of Pearse and the socialist James Connolly are an awkward encumbrance on an Irish state that has its roots in the counter-revolution of the civil war, and which has emerged as a haven of economic neoliberalism.

In this fascinating alternative history of modern Ireland, Kieran Allen follows the thread of 1916’s ‘revolutionary tradition’ - an uneasy marriage of Socialism and Republicanism - as it has unravelled across the century.

From the strikes, boycotts, occupations and land redistribution that accompanied the war of independence; to the ‘carnival of reaction’ that followed; all the way up to the current movement against water charges and austerity, Allen reveals the complexities, ruptures and continuities of a revolutionary tradition that continues to haunt the establishment today.

'A fluent, indignant book' - Neil Hegarty, Irish Times 'A vivid and vital account of how class shaped the national movement which arose in the wake of the Rising - and thus shaped the Ireland we live in today' - Eamonn McCann, Irish journalist, and author of 'War and an Irish Town' (Pluto, 1993) 'An essential and unparalleled joy to read' - Socialist Review
Preface
1. Ireland Turned Upside Down
2. 1916: Armed Insurrection
3. The Irish Revolution
4. Republicanism and Counter-Revolution
5. A Most Conservative Country
6. The Rise and Fall of Radical Republicanism
7. From the Ashes a Phoenix Is Born
Conclusion
Notes
Select Bibliography
Index
Published by Pluto Press in Jan 2016
Paperback ISBN: 9780745336329
eBook ISBN: 9781783717446