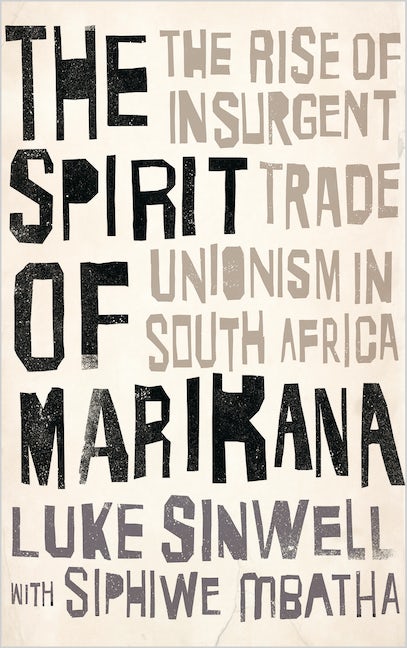 by Luke Sinwell and Siphiwe Mbatha

A comprehensive examination of the contemporary mineworkers’ movement in South Africa, in a vivid ethnographic narrative
On 16th August 2012, thirty-four black mineworkers were gunned down by the police under the auspices of South Africa's African National Congress (ANC) in what has become known as the Marikana massacre. This attempt to drown independent working-class power in blood backfired and is now recognised as a turning point in the country's history.

The Spirit of Marikana tells the story of the uncelebrated leaders at the world's three largest platinum mining companies who survived the barrage of state violence, intimidation, torture and murder which was being perpetrated during this tumultuous period. What began as a discussion about wage increases between two workers in the changing rooms at one mine became a rallying cry for economic freedom and basic dignity.

'Opens a window on the struggles of South Africa miners to overcome not only the opposition of the plutocratic mineowners, but also the opposition of the entrenched union establishment created in an earlier era of upheaval.' - Frances Fox Piven, City University of New York Graduate Center 'Highlights the crucial role of ordinary workers in changing history. It is a richly textured portrayal of the lives and activities of the grassroots worker leaders who organised the historic platinum strikes in South Africa. It is a path-breaking history of the labour movement and a scholarly tribute to the agency of the slain Marikana miners and their comrades' - Trevor Ngwane, South African socialist and anti-apartheid activist 'The book provides what is currently missing - a detailed and sympathetic history, from within the ranks of the unions and workers committees and in the words of the strikers themselves' - Leo Zeilig, editor of Class Struggle and Resistance in Africa (2008) 'This book provides a fascinating and unique account of a set of pivotal events in recent South African history, as well as insight that is both locally and comparatively profound' - Dunbar Moodie, Professor of Sociology, Wits University 'An incisive yet empathetic account' - African Studies Quarterly 'Exceptionally extraordinary' - CLR Journal
Glossary of South African Organisations
List of Acronyms and Abbreviations
List of Leaders
Timeline of Key Events
Acknowledgements
Maps
1. Introduction
2. The Spark Underground
3. The Spirit of Marikana is Born
4. Amplats Carries the Torch
5. The Rise of the AMCU and the Demise of Worker Committees
6. Insurgent Trade Unionism and the Great Strike of 2014
Postscript
Appendices
Notes
Selected Bibliography
Index
Published by Pluto Press in Jul 2016
Paperback ISBN: 9780745336480
Hardcover ISBN: 9780745336534
eBook ISBN: 9781783719693

Luke Sinwell went to a small mining town in Marikana to understand the massacre of thirty-four black mineworkers who were gunned down by police on 16 August 2012, nearly twenty years into the post-apartheid South African period.

Luke Sinwell on the government that pulled the trigger and the workers who survived the Marikana massacre in 2012.

END_OF_DOCUMENT_TOKEN_TO_BE_REPLACED
Back to Top
X