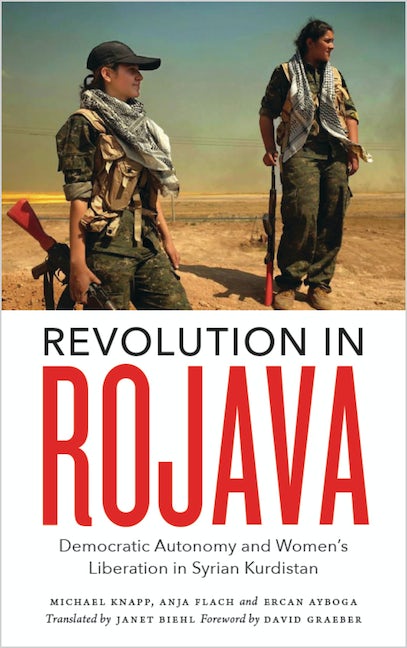 The first full-length book of the unique and extraordinary political situation in Rojava, Syria
A new kind of society is being built in Syria, but it's not one you would expect. Surrounded by deadly bands of ISIS and hostile Turkish forces, the people living in Syria's Rojava cantons are carving out one of the most radically progressive societies on the planet today. Western visitors have been astounded by the success of their project, a communally organised democracy which considers women's equality indispensable and rejects reactionary nationalist ideology whilst being fiercely anti-capitalist.

The people of Rojava call their new system democratic confederalism. An implementation of the recent ideology of the imprisoned Kurdish leader Abdullah Ocalan, it boasts gender quotas of 40 percent, bottom-up democratic structures, deep-reaching ecological policies and a militancy which is keeping ISIS from the gates.

Revolution in Rojava is the first full-length study of this ongoing social and political transformation in Syrian Kurdistan. It is the first authentic insight into the complex dimensions of the revolution. Its authors use their own experiences of working and fighting in the region to construct a picture of hope for Middle-Eastern politics and society, and reveal an extraordinary story of a battle against the odds.

Michael Knapp is a historian of radical democracy, Cofounder of the Campaign Tatort Kurdistan and member of NavDem Berlin. His research focuses on the Kurdish issue and the construction of alternatives to capitalist modernity. His research has taken him to the Middle East, where he has studied the Kurdish Liberation Struggle and the PKK.

Anja Flach is an enthnologist and member of the Rojbîn women's council in Hamburg. She spent two years in the Kurdish women's guerrilla army and has previously published books about her experiences.

Ercan Ayboga is an environmental engineer and activist. Formerly living and co-founding the Tatort Kurdistan Campaign in Germany, now he lives in North Kurdistan and is politically involved in the Mesopotamian Ecology Movement, particularly in water struggles.

'Written by long-time activists of the Kurdish freedom movement, this book is the first authentic insight into the complex dimensions of Rojava's radical revolution' - Dilar Dirik, author and activist of the Kurdish Women's Movement 'The Kurdish revolution of Democratic Autonomy is of enormous importance for the future of the world. It points a possible way forward out of the tragedy of the Middle East, and more than that: a possible way forward out of the catastrophe that is capitalism. This book is of great help... A careful and detailed account that is filled with personal narrative, it is both easily accessible and very informative' - John Holloway, Professor of Sociology, Autonomous University of Puebla, author of Crack Capitalism (Pluto, 2010) 'A deeply insightful contribution to understanding the Kurdish movement's achievements in Rojava' - ROAR 'Gives a profound insight' - Firat News Agency 'A comprehensive and readable guide to the complex situation. This hugely exciting and important book has wider lessons for feminists, ecosocialists and others who want to create an anti-capitalist alternative' - Green Left Weekly 'Provides excellent background information about this important but little understood struggle' - The Monthly
List of Figures
Translator’s Note
Foreword by David Graeber
Introduction
Prologue: On the Road to Til Koçer
1. Background
2. Rojava’s Diverse Cultures
3. Democratic Confederalism
4. The Liberation
5. A Womens' Revolution
6. Democratic Autonomy in Rojava
7. Civil Society Associations
8. Defense: The Theory of the Rose
9. The New Justice System
10. The Democratization of Education
11. Health Care
12. The Social Economy
13. Ecological Challenges
14. Neighbors
15. Prospects
Afterword: The Philosophy of Democratic Autonomy by Asya Abdullah
Glossary
About the Authors
Index
Published by Pluto Press in Oct 2016
Paperback ISBN: 9780745336596
eBook ISBN: 9781783719884

Witnesses to the Revolution in Rojava

Janet Biehl talks to the authors of Revolution in Rojava and discusses how and why the society in Rojava so inspired them.

END_OF_DOCUMENT_TOKEN_TO_BE_REPLACED
Back to Top
X