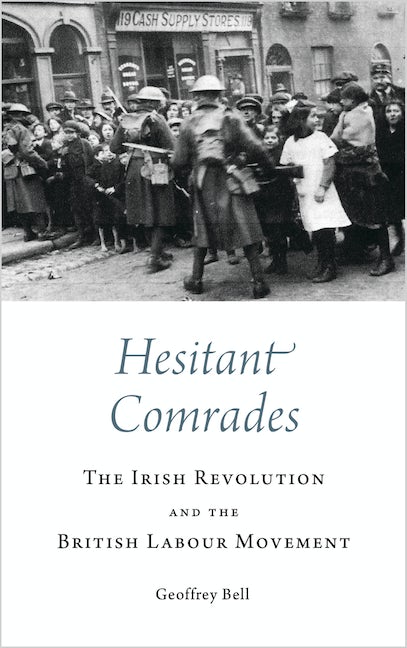 The Irish Revolution and the British Labour Movement

Geoffrey Bell's Hesitant Comrades is the first published history of the policies, actions and attitudes of the British working class towards the Irish national revolution of 1916-21.Drawing...

Geoffrey Bell's Hesitant Comrades is the first published history of the policies, actions and attitudes of the British working class towards the Irish national revolution of 1916-21.

Drawing principally on primary sources, Bell brings to light for the first time important incidents in British/Irish history, including how the leaders of British trade unions were complicit in Belfast loyalist sectarianism; the troubled nature of the Labour Party's relations with its Irish community; and how the Bolsheviks criticised British Marxists over their inaction on Ireland. The author also considers socialist debates on the compatibility of Irish nationalism with socialism, as well as the contentious 'Ulster question'. He examines prominent figures of the era, ranging from Ramsay MacDonald to Sylvia Pankhurst. With sources ranging from newly discovered writings to reports of police spies - Hesitant Comrades is a scholarly, provocative and groundbreaking perspective on the fragile relationship between the British left and the Irish revolution.

Geoffrey Bell was born in Belfast and has written extensively about Ireland and British attitudes to 'The Troubles', past and recent, for print, television and exhibitions. These include Protestants of Ulster (Pluto), and Pack Up the Troubles (Channel Four).

'The definitive account of the response of the British labour movement to the Easter Rising and Irish War of Independence' - John Newsinger, Professor of History at Bath Spa University, and author of 'The Blood Never Dried: A People's History of the British Empire' (2000)

'A very well written and closely researched account ... very much a post-revisionist history of the Irish Revolution and its aftermath placed in the context of the interconnected and shared histories between Britain and Ireland'<br> - Mary Hickman, Professorial Research Fellow, Centre for Irish Studies at St. Mary's University, and co-author of 'Migration and Social Cohesion in the UK' (Palgrave Macmillan, 2012)

'This is clearly a definitive account of the British left's problematic relations with Ireland. It is highly recommended to all who have an interest in the Irish Question then and now' - NW Labour History Journal