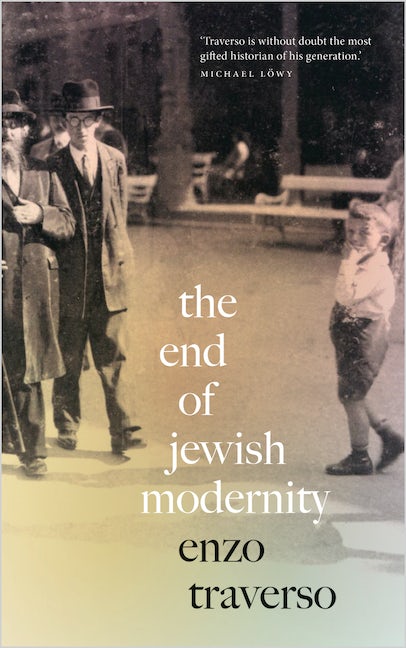 The End of Jewish Modernity

A provocative take on Jewish history, explaining the metamorphoses of mainstream Jewish culture and politics
Has Jewish modernity exhausted itself? Flourishing between the age of Enlightenment and the Second World War, the intellectual, literary, scientific and artistic legacy of Jewish modernity continues to dazzle us, however, in this provocative new book, esteemed historian Enzo Traverso argues powerfully that this cultural epoch has come to an end.

Previously a beacon for critical thinking in the Western world, the mainstream of Jewish thought has, since the end of the war, undergone a conservative turn. With great sensitivity and nuance, Traverso traces this development to the virtual destruction of European Jewry by the Nazis, and the establishment of the United States and Israel as the new poles of Jewish communal life. This is a compelling narrative, hinged upon a highly original discussion of Hannah Arendt's writings on Jewishness and politics.

With provocative chapters on the relationship between antisemitism and Islamophobia, the ascendance of Zionism, and the new 'civil religion of the Holocaust', The End of Jewish Modernity is both an elegy to a lost tradition and an intellectual history of the present.

Enzo Traverso is Susan and Barton Winokur Professor in the Humanities at Cornell University. His publications include more than ten authored and edited books, including The End of Jewish Modernity (Pluto, 2016), Fire and Blood, The European Civil War 1914-1945 (Verso, 2016) and Understanding the Nazi Genocide: Marxism after Auschwitz (Pluto Press, 1999).

'Enzo Traverso is without doubt the most gifted historian of his generation. His book on Jewish modernity is, as all his writings, a unique combination of radical commitment and brilliant scholarship' - Michael Löwy, Emeritus Research Director in Social Sciences at the Centre National de la Recherche Scientifique (Paris), and author of On Changing the World: Essays in Political Philosophy from Karl Marx to Walter Benjamin 'Imaginative and provocative ... a nuanced and intelligent treatise' - Benjamin Ramm, Jewish Quarterly 'Stimulating' - Times Literary Supplement 'Exciting and delightful ... this slim volume manages to deliver a comprehensive statement which makes a significant contribution to the discourses of politics, postmodern theory and intellectual history' - The Muslim World Book Review
Acknowledgements
Introduction
1. What Was Jewish Modernity?
2. Cosmopolitanism, Mobility and Diaspora
3. Intellectuals between Critique and Power
4. Between Two Epochs: Jewishness and Politics in Hannah Arendt
5. Metamorphoses: From Judeophobia to Islamophobia
6. Zionism: Return to the Ethnos
7. Memory: The Civil Religion of the Holocaust
Conclusion
Notes
Index
Published by Pluto Press in Jul 2016
Paperback ISBN: 9780745336664
eBook ISBN: 9781783718184

Looking at politics, the media and cultural output, Traverso reveals significant similarities between today’s Islamophobia and the older anti-Semitism.

END_OF_DOCUMENT_TOKEN_TO_BE_REPLACED
Back to Top
X