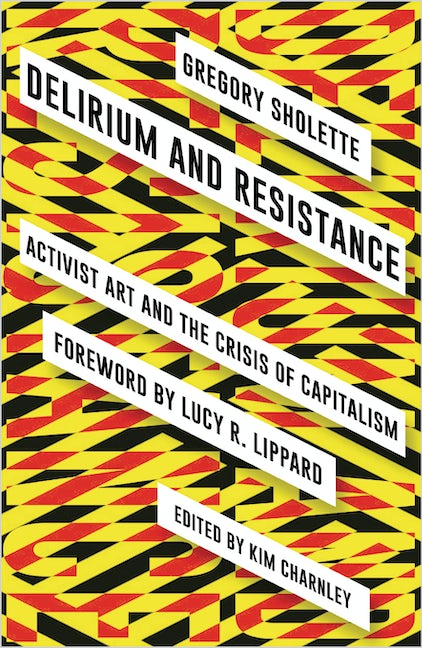 Draws on thirty years of critical debates and practices by artists and activist groups to advocate the undermining of capitalism through art
In the aftermath of the 2016 US elections, Brexit, and a global upsurge of nationalist populism, it is evident that the delirium and the crisis of neoliberal capitalism is now the delirium and crisis of liberal democracy and its culture. And though capitalist crisis does not begin within art, art can reflect and amplify its effects, to positive and negative ends.

In this follow-up to his influential 2010 book, Dark Matter: Art and Politics in the Age of Enterprise Culture, Sholette engages in critical dialogue with artists' collectives, counter-institutions, and activist groups to offer an insightful, firsthand account of the relationship between politics and art in neoliberal society. Sholette lays out clear examples of art's deep involvement in capitalism: the dizzying prices achieved by artists who pander to the financial elite, the proliferation of museums that contribute to global competition between cities in order to attract capital, and the strange relationship between art and rampant gentrification that restructures the urban landscape.

With a preface by noted author Lucy R. Lippard and an introduction by theorist Kim Charnley, Delirium and Resistance draws on over thirty years of critical debates and practices both in and beyond the art world to historicize and advocate for the art activist tradition that radically - and, at times, deliriously - entangles the visual arts with political struggles.

Kim Charnley is an art theorist and art historian based at Plymouth College of Art, whose work examines the relationship between politics and contemporary art. He is editor of Delirium and Resistance (Pluto, 2017).

'Read this book and you will never see contemporary art the same way again.' - Guerrilla Girls 'Sholette is representative of a new artist type that emerged after Conceptualism in that his work as a critic, theorist, and curator is central to his practice as an artist. He is one of the most cogent artist-theorists currently working in the domain of social practice art' - Andrew Hemingway, Professor Emeritus of Art History, University College London 'Shifting between artistic practice, curating, writing, and activism Gregory Sholette has been surfing the waves of activist art for more than three decades' - Gerald Raunig, philosopher and author of DIVIDUUM: Machinic Capitalism and Molecular Revolution, Part 1 (2016) 'A timely contribution to this ongoing global conversation between several generations of art activists around the ways in which their practice weaves between the contexts of art display, political campaigning and social movements' - Frieze
List of Figures
Abbreviations
Acknowledgements
Foreword: Is Another Art World Possible? - Lucy R. Lippard
Art on the Brink: Bare Art and the Crisis Of Liberal Democracy - Kim Charnley
Part I: Art World
Introduction I: Welcome to Our Art World
1. Fidelity, Betrayal, Autonomy: Within and Beyond the Post-Cold War Art Museum
2. Let’s Do It Again Comrades, Let’s Occupy the Museum!
3. Bare Art, Debt, Oversupply, Panic! (On the Contradictions of a Twenty-First-Century Art Education)
Part II: Cities Without Souls
Introduction II: Naturalizing the Revanchist City
4. Nature as an Icon of Urban Resistance on NYC's Lower East Side, 1979–1984
5. Mysteries of the Creative Class, or, I Have Seen the Enemy and They Is Us
6. Occupology, Swarmology, Whateverology: The City of Disorder versus the People’s Archive
7. Art After Gentrification
Part III: Resistance
Introduction III: Critical Praxis/Partisan Art
8. Counting on Your Collective Silence: Notes on Activist Art as Collaborative Practice
9. Dark Matter: Activist Art and the Counter-Public Sphere
10. On the Maidan Uprising and Imaginary Archive, Kiev
11. Delirium and Resistance After the Social Turn
Postscript: December 2016
Notes
Bibliography
Index
Published by Pluto Press in Apr 2017
Paperback ISBN: 9780745336848
Hardcover ISBN: 9780745336886
eBook ISBN: 9781786800602

END_OF_DOCUMENT_TOKEN_TO_BE_REPLACED
Back to Top
X