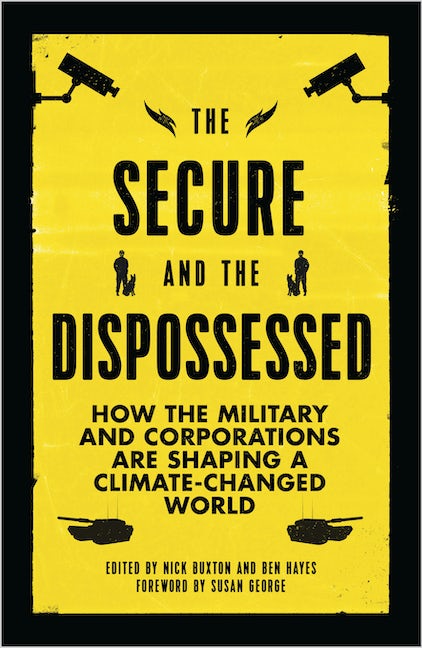 The Secure and the Dispossessed

How the Military and Corporations are Shaping a Climate-Changed World

An exploration into how the elite exploit the impact of climate change and how communities can resist this process.
While the world's scientists and many of its inhabitants despair at the impact of climate change, corporate and military leaders see nothing but opportunities. For them, melting ice caps mean newly accessible fossil fuels, borders to be secured from 'climate refugees', social conflicts to be managed and more failed states in which to intervene. They are 'securing' their assets at the expanse of the planet and its inhabitants.

The Secure and the Dispossessed looks at these deadly approaches with a critical eye. It also considers the flip-side: that the legitimacy of the elite is under unprecedented pressure – from resistance by communities to resource grabs to those creating new ecological and socially just models for managing our energy, food and water.

Topics covered include geoengineering, militarism, refugee protection, greenwashing and the agricultural crisis among others. Adaptation and resilience to a climate-changed world is desperately needed, but the form it will take will affect all of our futures.

Nick Buxton is Communications Manager for TNI. He has edited a number of books including State of Power (TNI, 2015) and The Secure and the Dispossessed (Pluto, 2015).

Ben Hayes has worked for the civil liberties organisation Statewatch since 1996, specialising in security, policing and counter-terrorism policy. He now works as an independent researcher and consultant and is a Fellow of the Transnational Institute. He is the co-editor of The Secure and the Dispossessed (Pluto, 2015).

'If you want to understand why we can't leave it to the Pentagon to shape our response to climate change, then you need to read this book' - Naomi Klein, author of This Changes Everything and The Shock Doctrine 'As this riveting analysis makes clear, climate change will have winners as well as losers. This is far too important to be left to the scientists' - Fred Pearce, environment consultant, New Scientist 'We can deal with the climate crisis either as a moment to build new global unity, or to further divide the planet between profiteering elites and everyone else. This book will help you understand the possibilities, and hopefully move you to join the fight for justice' - Bill McKibben, author of The End of Nature 'A tremendous book that shows how the few intend to profit from climate change and how the many can stop it happening' - John Vidal, Environment Editor, the Guardian 'Among the books that attempt to model the coming century, this one stands out for its sense of plausibility and danger' - Kim Stanley Robinson 'A must read for anyone concerned to secure ecological futures for more than just the rich and powerful few in the global system' - Simon Dalby, Balsillie School of International Affairs 'Brings together a series of excellent contributions to take apart the dangers and short-sightedness of securitising climate change. This is a badly needed book and a hugely important contribution to one of the most significant issues of our age' - Paul Rogers, Professor of Peace Studies at University of Bradford 'A brilliantly conceived volume that warns us of the dire political and ecological consequences of accepting a security rationale for the control of climate change policy that entrusts the human future to the main culprits of our era: corporate neoliberalism and geopolitical militarism' - Richard Falk, American Professor Emeritus of Internal Law at Princeton University 'This book provides a deep and wide-ranging analysis of the securitisation of climate change and its military and corporate sponsors and beneficiaries' - Betsy Hartmann, Professor Emerita of Developmental Studies and Senior Policy Analyst of the Population and Development Program, Hampshire College, Amherst, MA 'This book is an indispensable guide to the dystopian forces we must confront and the alternative just solutions we will need to advance' - Pablo Solon, Former Ambassador to the Plurinational Government of Bolivia and lead climate negotiator to the UN
List of Figures and Boxes
Acknowledgements
Foreword by Susan George
Introduction: Security for Whom in a Time of Climate Crisis? - Nick Buxton and Ben Hayes
Part I: The Security Agenda
1. The Catastrophic Convergence: Militarism, Neoliberalism and Climate Change - Christian Parenti
2. Colonising the Future: Climate Change and International Security Strategies - Ben Hayes
3. Climate Change Inc.: How TNCs are Managing Risk and Preparing to Profit in a World of Runaway Climate Change - Oscar Reyes
Part II: Security for Whom?
4. A Permanent State of Emergency: Civil Contingencies, Risk Management and Human Rights - Nafeez Ahmed, Ben Hayes and Nick Buxton
5. From Refugee Protection to Militarised Exclusion: What Future for ‘Climate Refugees’? - Ben Hayes, April Humble and Steve Wright
6. The Fix Is In: (Geo)engineering Our Way out of the Climate Crisis? - Kathy Jo Wetter and Silvia Ribeiro, ETC Group
7. Greenwashing Death: Climate Change and the Arms Trade- Mark Akkerman
Part III: Acquisition through Dispossession
8. Sowing Insecurity: Food and Agriculture in a Time of Climate Crisis - Zoe W. Brent, Nick Buxton and Annie Shattuck
9. In Deep Water: Confronting the Climate and Water Crises - Mary Ann Manahan
10. Power to the People: Rethinking 'Energy Security' - The Platform Collective
Conclusion: Finding Security in a Climate-Changed World - Nick Buxton and Ben Hayes
Notes on Contributors
Index
Published by Pluto Press in Nov 2015
Paperback ISBN: 9780745336961
eBook ISBN: 9781783717217