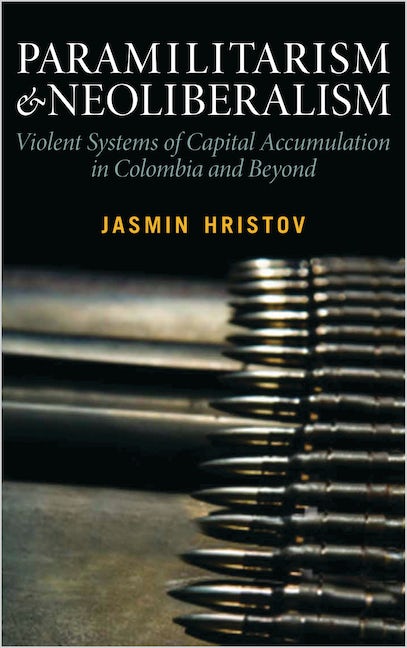 Violent Systems of Capital Accumulation in Colombia and Beyond

Why extreme violence is a necessity for capitalist accumulation to occur in Colombia and beyond
The people of Colombia have, for the last fifty years, been subject to a specific form of violence: paramilitarism. An embodiment of the dark underbelly of global capitalist accumulation, this form of pervasive violence expresses the exacerbation of social inequalities and class formation under capitalism. In Paramilitarism and Neoliberalism, Jasmin Hristov theorises this extreme expression in light of forced displacement, labour repression, subjugation of social movements, decentralisation of violence, drug trafficking and the emergence of a variety of para-institutional armed actors across Latin America.

The activities of paramilitary groups in the postdemobilisation era, their involvement in human rights violations, and their multilevel support networks inside major state institutions are documented, with a particular emphasis on violent dispossession and illegal land appropriation that has benefited agroindustries and mining enterprises. Hristov engages in a Marxist political economy approach, combined with a global sociological perspective, allowing for an expansive and deep-reaching understanding of paramilitarism as a phenomenon with many faces, ultimately illustrating how it is increasingly becoming the coercive counterpart of global capital.

Jasmin Hristov is Assistant Professor, Department of History and Sociology, The University of British Columbia, Okanagan. She is the author of Blood and Capital: The Paramilitarisation of Colombia (Ohio, 2009) and Paramilitarism and Neoliberalism: Violent Systems of Capital Accumulation (Pluto, 2017). She has had her work featured in the Journal of Peacebuilding and Development, the Journal of Peasant Studies, Social Justice, Latin American Perspectives, and Labour, Capital and Society.

'Very few books are able to penetrate the labyrinth of political development in Colombia and uncover the roots of the violence that has dominated the history of Colombia. This book does so with surprising agility, solid research and clear language. A must read for all those concerned and interested in political developments in Latin America' - Henry Veltmeyer, Universidad Autónoma de Zacatecas This is the first study to provide a theoretical understanding of paramilitary violence as an instrument of neoliberal globalization. Hristov writes with great clarity, passion, and commitment - William I. Robinson, Professor of Sociology, University of California at Santa Barbara, Author of Global Capitalism and the Crisis of Humanity 'An urgent and elegant indictment of the paramilitary-capital-state nexus in contemporary Colombia, unveiled with precision and a mastery of the facts' - Jeffery R. Webber, Queen Mary University of London, author of Red October: Left-Indigenous Struggles in Modern Bolivia
Acknowledgements
List of Tables
List of Figures
List of Acronyms
Map of Colombia
Preface/Author’s Note
1. Introduction: The Spectre of Paramilitarism
2. Foundations for Theorizing Paramilitarism
3. From Colonialism to Neoliberalism: A History of Dispossession
4. Eight Years after the Demobilisation of the AUC: The Predatory State-Capital Alliance of Domination (2006–14)
5. Paramilitarism, Neoliberalism and Globalisation: Towards a New Analytical Framework
6. Conclusion
References
Index
Published by Pluto Press in Nov 2016
Paperback ISBN: 9780745337005
eBook ISBN: 9781786801050

Colombia and the Battle for Peace

Jasmin Hristov examines the negative result of the Colombian Peace referendum and asks what the revised Accords holds for the future of Colombia.

END_OF_DOCUMENT_TOKEN_TO_BE_REPLACED
Back to Top
X