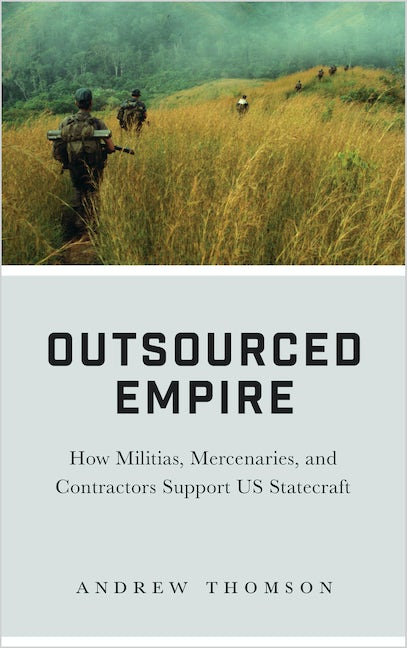 How Militias, Mercenaries, and Contractors Support US Statecraft

The full picture of the impact of paramilitary insurgencies across the globe.
There has been a shift in the way that we understand the forces behind imperialism. In this book, Andrew Thomson re-evaluates the history of US imperialism, from the Cold War to today, by looking at the influence of paramilitary actors.

Thomson reveals how these agents are central to US imperialism - from the Guatemalan coup to the Bay of Pigs, from Syrian rebel factions to the Soviet-Afghan War, bringing these narratives together to reveal the evolution of paramilitary insurgencies across the globe. Militias, mercenaries, and private companies (PMCs) have formed a central part of the strategies designed to influence political and economic conditions abroad, oriented towards the US’s Empire.

Drawing on declassified documents including US training manuals, CIA communiqués and the National Security Archive, Outsourced Empire reveals new evidence that helps us understand these institutions and their collective role in maintaining global order.

Andrew Thomson is a Lecturer at Queen's University Belfast and Research Fellow at the Mitchell Institute for Global Peace, Security and Justice. He is the author of Outsourced Empire (Pluto, 2018). He researches in the areas of pro-government militias and paramilitaries, dynamics of violence in civil wars, US foreign policy, the Colombian conflict and peace process, and US counterinsurgency and 'irregular' warfare.

'A timely and critical look at the evolution, formation, and role of US propelled paramilitarism ... a vital study' - Jeb Sprague, University of California, Santa Barbara, author of Paramilitarism and the Assault on Democracy in Haiti (Monthly Review Press, 2012) 'Existing works which seek to explain US foreign policy in imperial terms do not pay sufficient attention to the consistent use of para-state networks. Thomson corrects this lacuna, through detailed empirical analyses ... an original and distinctive book' - Sam Raphael, Department of Politics and IR, University of Westminster 'A very important and timely contribution' - Jasmin Hristov, University of British Colombia, author of Paramilitarism and Neoliberalism (Pluto, 2016)
List of Abbreviations and Acronyms
Introduction
1. US Imperial Statecraft and Para-Institutional Forces
2. Covert Regime Change in the Early Cold War: 'Power Moves
Involved in the Overthrow of an Unfriendly Government'
3. Counterinsurgent Statecraft: Militias, Mercenaries and Contractors
4. Reagan, Low-Intensity Conflict and the Expansion of
Para-Institutional Statecraft
5. Continuity After the Cold War and the Consolidation of
Para-Institutional Complexes
6. The War on Terror, Irregular Warfare and the Global
Projection of Force
Conclusions
Notes
Index
Published by Pluto Press in Jun 2018
Paperback ISBN: 9780745337036
eBook ISBN: 9781786802637