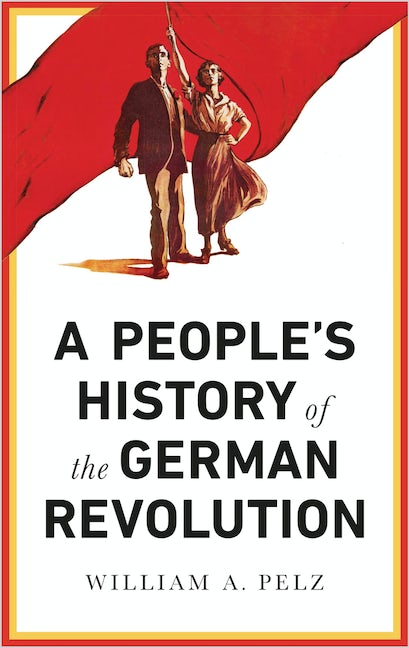 A People's History of the German Revolution

A myth-busting popular history of the German Revolution focusing on the roles of women, workers and ordinary people
In October 1918, war-weary German sailors mutinied when the Imperial Naval Command ordered their engagement in one final, fruitless battle with the British Royal Navy. This revolt, in the dying embers of the First World War, quickly erupted into a full scale revolution that toppled the monarchy and inaugurated a period of radical popular democracy.

The establishment of the Weimar Republic in 1919 ended the revolution, relegating all but its most prominent leaders to a historical footnote. In A People's History of the German Revolution, William A. Pelz cuts against the grain of mainstream accounts that tend to present the revolution as more of a 'collapse', or just a chaotic interregnum that preceded the country's natural progression into a republic.

Going beyond the familiar names of Karl Liebknecht, Rosa Luxemburg or Clara Zetkins, Pelz explores the revolution from the bottom up, focusing on the active role that women, rank-and-file activists, and ordinary workers played in its events. Rejecting the depiction of agency as exclusively in the hands of international actors like Woodrow Wilson or in those of German elites, he makes the compelling case that, for a brief period, the actions of the common people shaped a truly revolutionary society.

William A. Pelz (1951-2017) was Director of the Institute of Working Class History in Chicago and a Professor of History at Elgin Community College. His works include A People's History of the German Revolution, (Pluto, 2018) Wilhelm Liebknecht and German Social Democracy (Haymarket, 2015), The Eugene V. Debs Reader (Merlin Press, 2014) and A People's History of Modern Europe (Pluto, 2016).

Mario Kessler is Associate Professor at the Centre for Contemporary History, Potsdam, Germany. He is the author of Revolution and Counterrevolution: Studies on Violence and Humanity from the Century of Disasters (2016) and Ruth Fischer: A Life with and against Communists (2013) amongst many other works.

'An excellent work with the focus on the grassroots out of which developed the revolutionary mass movements of the sailors and workers bringing peace and democracy to Germany' - Ottokar Luban, International Rosa Luxemburg Society 'A rigourous analysis and narrative history of the working class in a place and time where the idea of the emancipation of humanity was a real possibility' - Raquel Varela, Labor Historian, New University of Lisbon, IISG Honorary Fellow

Foreword by Mario Kessler
Introduction: What German Revolution?
1. Industrialization and the Emergence of the German Working Class
2. The Rise of Popular Radicalism
3. War, Suffering and Resistance
4. The Road to the November Revolution
5. The Kaiser Goes, the Generals Remain
6. Provocation, Revolt and Repression
7. Women in the War and the Revolution
8. Death Agony of the Revolution
Conclusion
Notes
Index