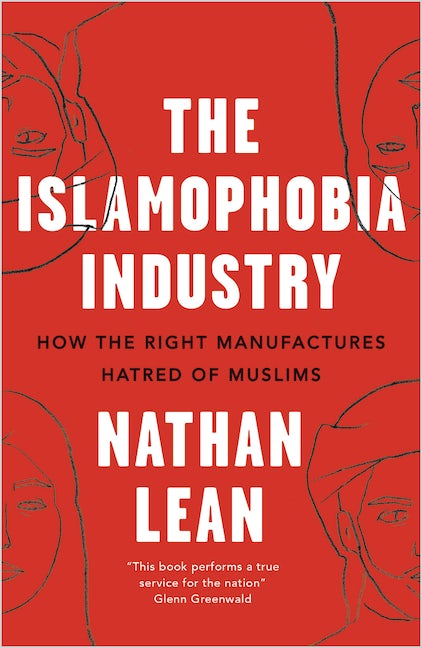 How the Right Manufactures Hatred of Muslims

A journalistic look at the terrifying growth of Islamophobia across the Western world today
This is a disturbing account of the campaign to promote fear and hatred of Muslims in the United States and Europe, from the 'War on Terror' to Trump's travel ban.

Nathan Lean takes us through a world of conservative bloggers, right-wing talk show hosts, evangelical religious leaders and politicians, united in their efforts to demonise Muslims as the new enemy of Western civilization. Lean uncovers their scare tactics, traces their sources of funding and exposes the ideologies that drive their lucrative propaganda machine.

This second edition includes new material on the Trump campaign and presidency, tracking the rise to power of some of the Islamophobia Industry's most extreme figures. Writers from Breitbart, liberal anti-Muslim campaigners such as Bill Maher, and Trump-influencers such as Steve Bannon, Newt Gingrich and John Bolton are all put in the spotlight. This shocking and enlightening book is now more relevant than ever.

'This book performs a true service for the nation' - Glenn Greenwald, lawyer, journalist and author of No Place to Hide: Edward Snowden, the NSA and the Surveillance State 'A brave and provocative book ... Highly recommended' - CHOICE 'This concise, accessible and illuminating book meets one of the most urgent needs of our time ... required reading' - Karen Armstrong, author of A History of God, Islam: A Short History and Muhammad 'This book exposes the dirty secrets of those who try to manipulate public opinion against Muslims. It should be read by everyone who values truth and intercultural understanding' - Mark Juergensmeyer, Professor of Global Studies at the University of California, Santa Barbara, and author of Terror in the Mind of God: The Global Rise of Religious Violence 'A book of immense importance for our times' - Reza Aslan, author of No God But God and Beyond Fundamentalism 'In this provocative and engaging book, Nathan Lean meticulously untangles the dense web of fear merchants that have made Muslim bashing a cottage industry. Lean's is a battle against Islamophobia, one that he wages with a seamless and compelling narrative.' - Juan Cole, author of Engaging the Muslim World 'A lucid and detailed examination of the dark side of our politics. No one should take comfort from his conclusions about the outsized influence of extremists on our mainstream culture' - Richard Wolffe, MSNBC political analyst and author of Renegade: The Making of a President 'In a tightly-written, fast-paced narrative that feels like a thriller, Nathan Lean shows us just how deep the rabbit hole goes. Essential reading for anyone who wants a window into the origins of contemporary Islamophobia' - Eboo Patel, author of Acts of Faith and Sacred Ground 'A convincing demonstration of the threat Islamophobia poses to a pluralistic society and democratic values. An important resource for all who wish to understand the forces that manipulate our political process and discourse' - Ingrid Mattson, Chair in Islamic Studies, Huron University College 'An eye-opener — the most comprehensive book to date on a new and dangerous cycle of minority persecution in American society. Lean's book exposes the key players, funders and enablers of Islamophobia in America and the destructive effect of their politics on our national fabric. It is worth every minute of reading' - Karen Armstrong, author of A History of God, Islam: A Short History and Muhammad
Acknowledgements
Author's Note
Foreword to the First Edition by John L. Esposito
Foreword to the Second Edition by Jack G. Shaheen
Introduction: Islamophobia from the War on Terror to the Age of Trump
1. A History of American Monster Making
2. Hate on the Internet
3. Inside the Mainstream Media Echo Chamber
4. The Christian Right’s Battle for Muslim Souls
5. The Influence of the Pro-Israel Right
6. The Rise of Liberal Islamophobia
7. Politicizing and Legislating Fear of Muslims
8. Islam as the Enemy of European Populism
Conclusion
Notes
Bibliography
Index
Published by Pluto Press in Sep 2017
Paperback ISBN: 9780745337166
eBook ISBN: 9781786801364

As intolerance becomes government policy uncovering the scare tactics, revealing the motives and exposing the ideologies that drive this Islamophobia machine becomes increasingly important, offers a historical perspective on the rising tide of...

END_OF_DOCUMENT_TOKEN_TO_BE_REPLACED
Back to Top
X