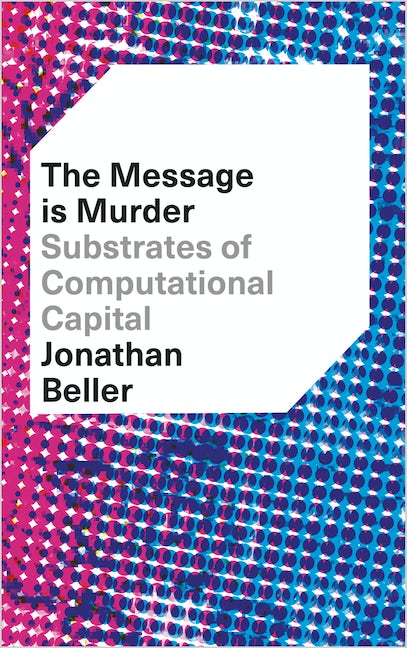 A compelling case for recognising media communications as technologies of political economy.

Written as a wake-up call to the field of media studies, The Message is Murder analyses the violence bound up in the everyday functions of digital media. At its core is the concept of 'computational capital' - the idea that capitalism itself is a computer, turning qualities into quantities, and that the rise of digital culture and technologies under capitalism should be seen as an extension of capitalism's bloody logic.

Engaging with Borges, Turing, Claude Shannon, Hitchcock and Marx, this book tracks computational capital to reveal the lineages of capitalised power as it has restructured representation, consciousness and survival in the twentieth and twenty-first centuries. It argues that the global intensification of inequality relies on the discursive, informatic and screen-mediated production of social difference.

Ultimately The Message is Murder makes the case for recognising media communications across all platforms - books, films, videos, photographs and even language itself - as technologies of political economy, entangled with the social contexts of a capitalism that is inherently racial, gendered and genocidal.

Jonathan Beller is a revered film theorist, culture critic and mediologist. He is Professor of Humanities and Media Studies at the Pratt Institute and Director of the Graduate Program in Media Studies. He is the author of The Cinematic Mode of Production (UPNE, 2006), Acquiring Eyes (Ateneo de Manila University Press, 2006) and The Message is Murder (Pluto, 2017).

'Jonathan Beller powerfully addresses the most urgent issue of today's political economy: the gradual merging of capital and computation into new structures of power'

'Beller is one of the leading and pioneering theorists of the political economy of attention. This book is extremely pertinent for a readership seeking news ways of understanding contemporary capitalism. Beller has developed an original strategy by placing media archaeology and critical race theory in dialogue with the popularized work of Marshall McLuhan, and also by using Marx and Borges as interlocutors of well-known cyber-theorists such as Turing and Shannon'

- Allen Feldman, Professor of Media, Culture, and Communication at New York University, and author of Archives of the Insensible

'So-called digital culture operates on and intensifies a substrate of racial-capitalist calculation that precedes the invention of the electronic digital computer. Jonathan Beller's remarkable book examines the implications of this foundational claim through 'poetico-theoretical' analyses of information theory, literature, and cinema. By tracking the co-constitutive operations of economics, informatics, visuality, and psychology, Beller reveals the violent formations that ground contemporary mediatic regimes'

- Seb Franklin, author of Control: Digitality as Cultural Logic
Introduction
Part I: Informatics of Inscription/Inscription of Informatics
1. Gramsci’s Press: Why We Game
2. A Message from Borges: The Informatic Labyrinth
3. Alan Turing’s Self-Defense: On Not Castrating the Machines
4. Shannon/Hitchcock: Another Method for the Letters
5. The Internet of Value, by Karl Marx: Information as Cosmically Distributed Alienation
Part II: Photo-graphology, Psychotic Calculus and Informatic Labor
6. Camera Obscura After All: The Racist Writing with Light
7. Pathologistics of Attention
8. Prosthetics of Whiteness: Drone Psychosis
9. The Capital of Information: Fractal Fascism, Informatic Labor and M-I-M’
Appendix: From the Cinematic Mode of Production to Computational Capital – An Interview conducted by Ante Jeric and Diana Meheik for Kulturpunk
Notes
Index