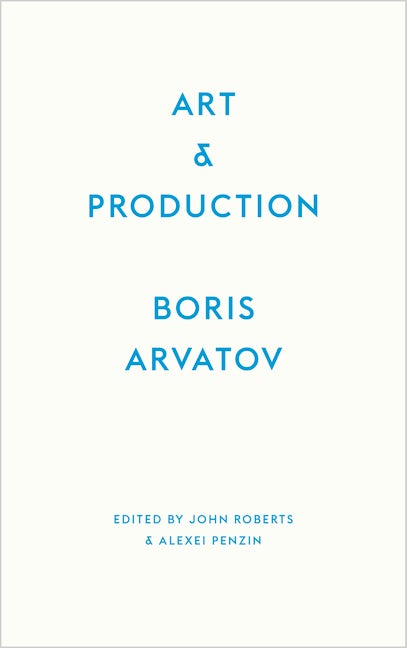 A classic of Russian avant-garde writing, focusing on the Productivist art movement of the 1920s
Boris Arvatov's Art and Production is a classic of the early Soviet avant-garde. Now nearing a century since its first publication, it is a crucial intervention for those seeking to understand the social dynamic of art and revolution during the period.

Derived from the internal struggles of Soviet Constructivism, as it confronted the massive problems of cultural transformation after 'War Communism', Arvatov's writing is a major force in the split that occurred in the revolutionary horizons of Constructivism in the early 1920s. Critical of early Constructivism's social-aesthetic process of art's transformation of daily life - epitomised in studio-based painting, photography and object making - Arvatov polemicises for the devolution of artistic skills directly into the relations of production and the factory.

Whilst acknowledging the problems of a pure factory-based Productivism, Arvatov remains overwhelmingly committed to a new role and function for art outside the conventional studio and traditional gallery. Addressing issues such as artistic labour and productive labour, the artist as technician, art and multidisciplinarity and a life for art beyond 'art' - finding new relevance amidst the extensive social turn of contemporary participatory art - Art and Production offers a timely and compelling manifesto.

Boris Arvatov (1896-1940) was a leading figure and a leading theorist in the post-revolutionary Soviet avant garde - a movement that is being urgently reassessed by present day cultural theorists and academics. He is the author of the classic, Art and Production (Pluto, 2017).

John Roberts is Professor of Art and Aesthetics at the University of Wolverhampton. He is the author of a number of books, including The Intangibilities of Form (Verso, 2007), Philosophising the Everyday (Pluto, 2006) and Revolutionary Time and the Avant-Garde (Verso, 2016). He edited the English translation of Boris Arvatov's classic Art and Production (Pluto, 2017).

Alexei Penzin, is Reader in the School of Art at the University of Wolverhampton and Research Associate at the Institute of Philosophy in Moscow. He is a member of interdisciplinary collective Chto Delat. He is the author of Against the Continuum (Bloomsbury, 2017) and co-editor of Art and Production (Pluto, 2017).

'A passionate proclamation of the sovereign right of art to give a form not only to the artworks but also to society, state and everyday life of the people. Today's art tends to neglect this right - and that is why Arvatov's text is so relevant for our time' - Boris Groys, Global Distinguished Professor of Russian and Slavic Studies at New York University 'The appearance of an English translation of Art and Production is welcomed by all those interested in the relationship between art, politics and social change. It explores some of the questions we are still grappling with, such as the relation between cultural production and mass communication, fine and applied arts and the capacity of art to act as a base for the revolutionising of social consciousness' - Craig Brandist, Professor of Cultural Theory and Intellectual History and Director of the Bakhtin Centre, Russian and Slavonic Studies, School of Languages and Cultures, University of Sheffield 'This is a great publication. It’s full of a mass of ideas that reads fresh and exciting, showing what artistic creativity the revolution released' - Socialist Review 'This invective against the decorative and contemplative role of art in pre-revolutionary society still provides today’s readers cause for reflection, if not inspiration' - Brooklyn Rail
Acknowledgements
Introduction: Art and 'Life-Building': The Legacy of Boris Arvatov, by John Roberts
1. Capitalism and the Artistic Industry
2. Easel Art
3. Art and Production in the History of the Workers' Movement
4. Art in the System of Proletarian Culture
Afterword: The 'Electrification of Art': Boris Arvatov's Programme for Communist Life, by Alexei Penzin
Index
Published by Pluto Press in Aug 2017
Paperback ISBN: 9780745337364
eBook ISBN: 9781786801845