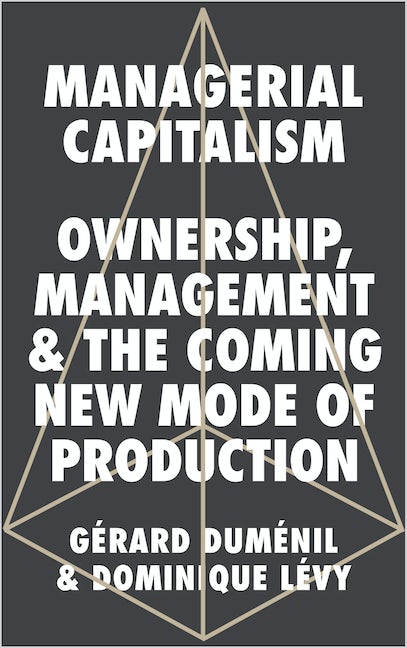 by Gérard Duménil and Dominique Lévy

An innovative Marxist analysis of the new managerial class.
The debate around growing inequality is raging amongst economists, and Marxists are finding new ways to map-out the modern economy. Managerial Capitalism introduces a new way of understanding the changing structure of our economy through the emergence and behaviour of a new class – managers.

In the post war years as social democracy reigned, managers tended to form compromises with workers. However, under neoliberalism, allegiances have shifted. Today, a new alliance is forming between managers and capitalist owners, changing the nature of the hierarchy of power under capitalism. Additionally, the authors argue, this is happening much faster and universally than was previously thought.

By applying Marx's basic concepts to the reality of the system today, through the use of extensive data sets as well as firmly rooting the argument in its historical context, Managerial Capitalism updates Marxism for the twenty-first century, through showing how the modes of production today are shaped by a new class, that must be understood if it is to be challenged.

Gerard Duménil is an economist and former Research Director at the Centre National de la Recherche Scientifique. He is a member of the editorial board of Actuel Marx. He is the co-author with Dominique Levy of Managerial Capitalism (Pluto, 2018), and The Crisis of Neoliberalism (HUP, 2014).

Dominique Lévy is an economist and former Research Director at the Centre National de la Recherche Scientifique. He is a member of the editorial board of Actuel Marx and co-author of Managerial Capitalism (Pluto, 2018) and The Crisis of Neoliberalism (HUP, 2014).

'Every serious student of political economy will want to read Gerard Dumenil and Dominique Levy's masterful synthesis of Marxist method, contemporary Econo-physics, and their own theoretical and empirical work on the emergence of neoliberal managerial forms of capitalism on a global scale' - Duncan K. Foley, Leo Model Professor of Economics, New School for Social Research

List of Figures
List of Tables
Introduction
1. An overview
PART I: MODES OF PRODUCTION AND CLASSES
2. Patterns of income distribution
3. Marx’s theory of history
4. Managers in Marx’s analysis
5. Sociality and class societies
6. Managerialism and managerial capitalism
7. A wealth of alternative interpretations
8. Hybridization as analytical challenge
PART II: TWELVE DECADES OF MANAGERIAL CAPITALISM
9. Varying trends of inequality
10. The sequence of social orders
11. Class and imperial power structures
12. The politics of social change
13. Tendencies, crises, and struggles
PART III: PAST ATTEMPTS AT THE INFLECTION OF HISTORICAL DYNAMICS
14. Utopian capitalism in bourgeois revolutions
15. Utopian socialism and anarchism
16. Self-proclaimed scientific socialism
PART IV: PROSPECTS FOR HUMAN EMANCIPATION WITHIN AND BEYOND MANAGERIALISMS
17. The economics and politics of managerialisms
18. The potential of popular struggle
Notes
Index