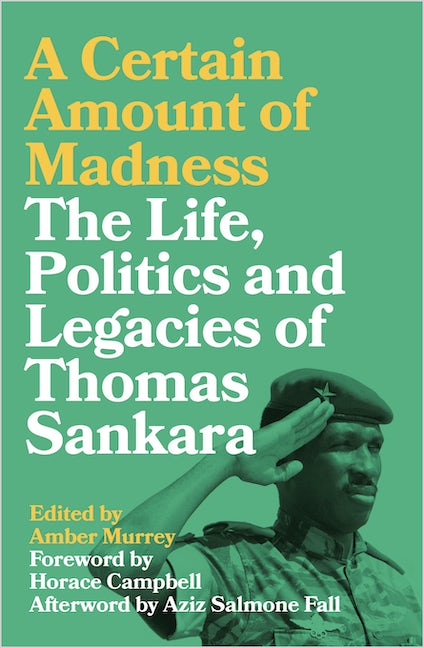 A Certain Amount of Madness

The Life, Politics and Legacies of Thomas Sankara

Thomas Sankara was one of Africa's most important anti-imperialist leaders of the late 20th Century. His declaration that fundamental socio-political change would require a 'certain amount of madness' drove the Burkinabe Revolution and resurfaced in the country's popular uprising in 2014.

This book looks at Sankara's political philosophies and legacies and their relevance today. Analyses of his synthesis of Pan-Africanism and humanist Marxist politics, as well as his approach to gender, development, ecology and decolonisation offer new insights to Sankarist political philosophies. Critical evaluations of the limitations of the revolution examine his relationship with labour unions and other aspects of his leadership style. His legacy is revealed by looking at contemporary activists, artists and politicians who draw inspiration from Sankarist thought in social movement struggles today, from South Africa to Burkina Faso.

In the 30th anniversary of his assassination, this book illustrates how Sankara's political praxis continues to provide lessons and hope for decolonisation struggles today.

Amber Murrey is an Associate Professor of Political Geography at the University of Oxford and a Fellow at Mansfield College, Oxford. Her award-winning scholarship on political ecologies and economies in Central Africa focuses on dissent and resistance amidst racialised extractive violence. Amber is the editor of 'A Certain Amount of Madness': The Life, Politics and Legacies of Thomas Sankara and Associate Editor of The African Geographical Review.

Horace G. Campbell teaches at Syracuse University in New York. He has been involved in the peace and justice movements for decades. He is the author of Barack Obama and Twenty-First-Century Politics (Pluto, 2010) and Rasta and Resistance From Marcus Garvey to Walter Rodney (Hansib, 2007).

'The legendary Thomas Sankara - hero, revolutionary leader, anti-imperialist - receives deserving analytical treatment from the most prominent radical voices here assembled for one the greatest sons of Africa. The book enhances our understanding of the pragmatism of politics, the rhetoric of revolutionary actions, and the resurgence of reactionary forces. A must read'

'This book by a wide range of committed scholars, including, crucially, a significant number of African scholars, is a necessary and illuminating intervention. The Sankara that emerges here is more than 'Africa's Che Guevara', a man whose ideas and politics are 'rich with a thousand nuances' that distinguish them from other forms of Marxism and Pan-Africanism. Sankara comes alive in all his complexity'

The Lives and Afterlives of Thomas Sankara

Thomas Sankara was one of Africa’s most important anti-imperialist leaders of the late 20th Century, but what is the relevance of Sankara’s political philosophies and legacies today?

END_OF_DOCUMENT_TOKEN_TO_BE_REPLACED
Back to Top
X