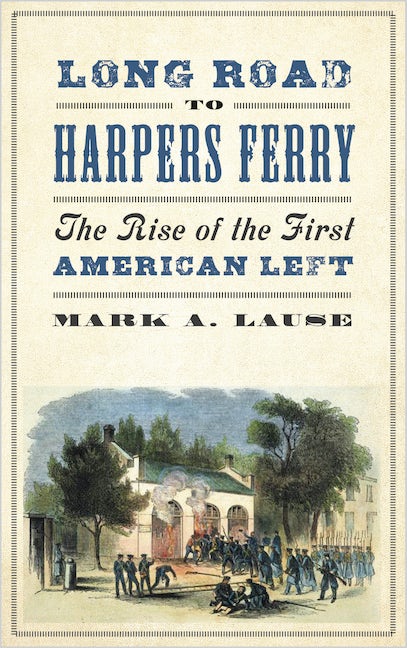 The Rise of the First American Left

by Mark A. Lause

A history of home-grown American radicalism in the 19th century.
This is the first comprehensive history of pre-Civil War American radicalism, mapping the journeys of the land reformers, Jacksonian radicals and militant abolitionists on the long road to the failed slave revolt of Harpers Ferry in 1859.

This book contains new and fascinating insights into the cast of characters who created a homegrown American socialist movement through the nineteenth century - from Thomas Paine's revolution to Robert Owen's utopianism, from James Macune Smith, the black founder of organised socialism in the US, to Susan B. Anthony, the often overlooked women's rights activist. It also considers the persistent pre-capitalist model of the Native American.

Long Road to Harpers Ferry captures the spirit of the times, showing how class solidarity and consciousness became more important to a generation of workers than notions of American citizenship. This is a story that's been hidden from official histories, which must be remembered if we are to harness the latent power of socialism in the United States today.

Mark A. Lause is Professor in the Department of History at the University of Cincinnati. He is the author of numerous books including Long Road to Harpers Ferry: The Rise of the First American Left (Pluto, 2018), The Great Cowboy Strike: Bullets, Ballots and Class Conflicts in the American West (Verso, 2017). He is a contributing editor to Labor Online, and he is on the editorial board of The North Star.

'By unearthing hidden history, Mark Lause describes the class struggle and working-class radicalism embedded within the American revolution. These working-class radicals also fought for the abolition of slavery, indigenous rights and women's equality. This is a must read!' - Sharon Smith, author of 'Subterranean Fire: A History of Working-Class Radicalism in the United States' 'A welcome antidote to the official myth of a country built by rugged, gun-toting individualists, Long Road to Harpers Ferry tells the story of collective resistance against slavery and exploitation in the early US. People's history at its best, Mark Lause's fine book brings this other America to life on its pages' - Francis King, editor, 'Socialist History' 'In this immensely original and important book, Mark Lause brilliantly reconceptualizes the road to Harpers Ferry by recovering the anti-capitalist and anti-racist agendas of the black and white abolitionists who organized and launched the raid, establishing the "First American Left' - John Stauffer, Kates Professor of English and of African and African American Studies at Harvard, and winner of the Frederick Douglass Book Prize

Introduction
Part I: Working Citizens: From Ideas to Organization
1. Liberty: Eighteenth-Century Transatlantic Legacies and Challenges
2. Equality: The Mandates of Community and the Necessity of Expropriation
3. Solidarity: Coalescing a Mass Resistance
Part II: Working Citizens Towards a Working Class: From Organization to a Movement
4. The Movement Party: Beyond the Failures of Civic Ritual
5. Confronting Race and Empire: Slavery and Mexico
6. Free Soil: The Electoral Distillation of Radicalism, 1847-1848
Part III: An Unrelenting Radicalism: From Movement to Cadres
7. Free Soil Radicalized: The Rise and Course of the Free Democrats 1849-1853
8. The Pre-Revolutionary Tinderbox: Universal Democratic Republicans, Free Democrats and Radical Abolitionists 1853-1856
9. The Spark: Small Initiatives and Mass Upheavals 1856-1860
Epilogue: Survival and Persistence: The Lineages and Legacies of the Early American Movement
Notes
Index