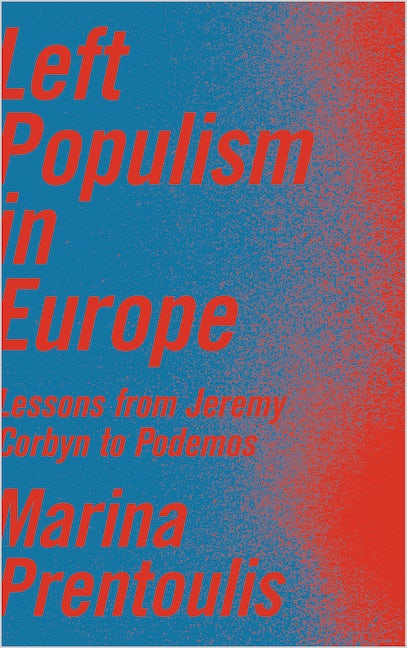 Lessons from Jeremy Corbyn to Podemos

Where does the left go from here?

This book evaluates the transformational process of left populism across grassroots, national and European levels and asks what we can do to harness the power of broad-based, popular left politics. While the right is using populist rhetoric to great effect, the left's attempts have been much less successful. Syriza in Greece and Jeremy Corbyn's Labour Party in Britain have both failed to introduce socialism in their countries, while Podemos has had better fortune in Spain and is now in government with the Spanish Socialist Workers' Party.

Bringing a wealth of experience in political organising, Marina Prentoulis argues that left populism is a political logic that brings together isolated demands against a common enemy. She looks at how egalitarian pluralism could transform economic and political institutions in a radical, democratic direction.

But each party does this differently, and the key to understanding where to go from here lies in a serious analysis of the roots of each movement's base, the forms of party organisation, and the particular national contexts. This book is a clear and holistic approach to left populism that will inform anyone wanting to understand and move forward positively in a bleak time for the left in Europe.

Marina Prentoulis is Associate Professor in Politics and Media at the University of East Anglia. She has she had acted as the UK spokesperson of Syriza and has given numerous interviews on British and International media including BBC’s Newsnight and the Andrew Marr Show as well as CNN and Sky News.

‘Rigorously reflecting on the choreography of contemporary left-wing experiments flirting with left populism in crisis-ridden Europe, Prentoulis offers a challenging first assessment of its political advances, limitations and potential for left strategy’

- Yannis Stavrakakis, Professor at the Aristotle University of Thessaloniki, Greece

‘An outstanding contribution to understand the shortcomings and yet potentials of the left populist experience … explains what left populism modestly achieved but also points very convincingly to what it has to do in the future to promote the values of equality, social justice and internationalism’

‘An important, timely appraisal of the European left, one that will inform and inspire activists’

‘It’s been a dramatic decade for left-wing political projects in Greece, Spain, and the UK. Through personal experience, a wealth of interviews and analysis, Prentoulis pulls together an assessment which is vital for anyone who wants to understand the post-crash upsurge of radical politics in Europe’

Acknowledgements
Introduction: Why Left Populism?
1. The Politics of Left Populism after the Global Financial Crisis
2. Grassroots Resistance, Austerity and the ‘Populist Moment’
3. Creating a Party for the Twenty-First Century: New Parties, New Structures?
4. Left Populism at Elections: Rhetoric and Programmes
5. The Institutionalisation of the Populist Promise
6. Europe and Its ‘Peoples’: Negotiating Sovereignty
Conclusion: Where We Are Today with Left Populism
Notes
Index