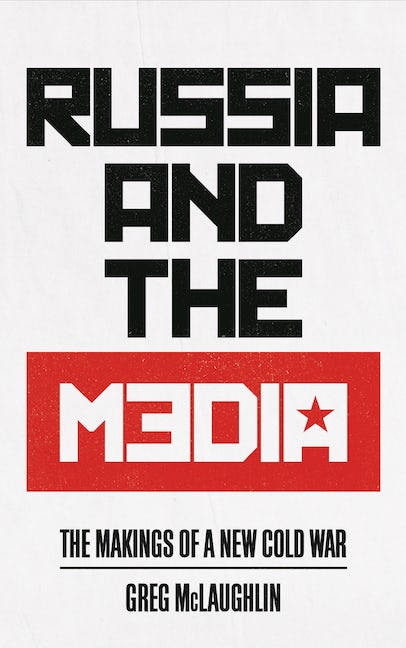 Russia and the Media

The Makings of a New Cold War

Are we witnessing the dawn of a new cold war?

President Vladimir Putin is a figure of both fear and fascination in the Western imagination. In the minds of media pundits and commentators, he personifies Russia itself - a country riven with contradictions, enthralling and yet always a threat to world peace.

But recent propaganda images that define public debate around growing tensions with Russia are not new or arbitrary. Russia and the Media asks, what is the role of Western journalism in constructing a new kind of Cold War with Russia? Focusing on British and US media coverage of moments of crisis and of co-operation between the West and Russia, McLaughlin exposes how such a Cold War framework shapes public perceptions of a major, hostile power reasserting itself on the world stage.

Scrutinising events such as the Ukraine/Crimea crisis, the Skripal Poisoning and Russia's military intervention in Syria - as well as analysing media coverage of the 2018 Russian presidential election and build up to the 2018 World Cup - Russia and the Media makes a landmark intervention at the intersection of media studies and international relations.

'This is a fascinating account of media coverage of Russia - an important source for students of international relations, media studies and journalism'

'A tremendous skewering of the increasingly hysterical tone adopted by the mainstream media when reporting on 'Russia'. In recent years, Western governments have spent millions in an attempt to reignite Russophobia in political and popular culture; books like this make the job of our security services and propaganda denizens that bit harder'

- David Miller, co-author of 'A Century of Spin: How Public Relations Became the Cutting Edge of Corporate Power'

Acknowledgements
Epigraph
Preface: The Cold War and Me
1. Introduction
2. The Cold War, the Media and the Enemy Image
3. Putin is Russia – Russia is Putin: Reporting the Presidential Elections, 2000–2018
4. Reporting Putin’s Russia: Political Opposition and Espionage
5. Putin at War: From Chechnya to Syria
6. Talking to Vladimir: ‘Bigger, Tougher, Stronger, Meaner’
7. The Makings of a New Cold War?
Appendix A The Putin Lexicon
Appendix B British Newspaper Headlines on Proposed - Boycott of World Cup 2018
Notes
References
Index