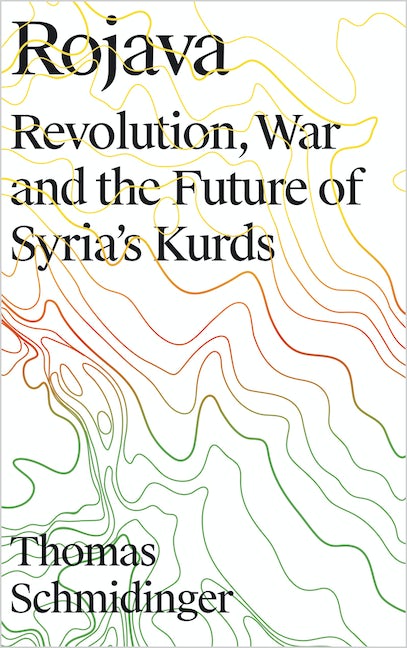 The history and politics of Syrian Kurdistan, with a special focus on the revolution in Rojava.
The Kurdish territory of Rojava in Syria has become a watchword for radical democracy, communalism and gender equality. But while Western radicals continue to project their own values onto the revolution, the complexities of the situation are often overlooked or misunderstood.

Based on over 17 years of research and fieldwork, Thomas Schmidinger provides a detailed introduction to the history and political situation in Rojava. Outlining the history of the Kurds in Syria from the late Ottoman Empire until the Syrian civil war, he describes the developments in Rojava since 2011: the protests against the regime, the establishment of a Kurdish para-state, the conflicts between the parties about the administration of the Kurdish territory and how the PYD and its People’s Councils rule the territory.

The book draws on interviews with political leaders of different parties, civil society activists, artists, fighters and religious leaders in order to paint an complex picture of the historical conflict and the contemporary situation.

Thomas Schmidinger is a Political Scientist and Cultural Anthropologist based at the University of Vienna. He is Secretary General of the Austrian Association for Kurdish studies. He is the author of Rojava, which received the Mezlum Bagok award.

'Preferable to most journalistic accounts that reduce the Rojava revolution to a single narrative. It will remain an informative resource even when the realities have further changed' - Martin van Bruinessen, Kurdish Studies 3 (2), (2015)

Acknowledgements
Preface to the English Edition
Preface to the Fourth Edition
Preface to the Third Edition
The Development of Kurdish Parties
1. The Long Struggle for Autonomy
2. Background and Methods of Social Science Research in War
3. Kurds, Arabs, Armenians, and Assyrians: Rojava as Part of the Ethnic Diversity of Syria
4. Muslims, Christians, Jews, Alevi, and Êzîdî: Religious Pluralism in Rojava
5. Kurdistan: Country without a State or Country against the State
6. Syrian Kurdistan under the French Protectorate
7. Kurds in Independent Syria
8. In the Crosshairs of Pan-Arabism: From the United Arab Republic to Ba‘athism
9. Special Census and Statelessness
10. The Kurds under Ba‘athist Rule
11. Between Two Brief Springs: Rojava under Bashar al-Assad
12. The Kurdish Party Landscape
13. From Revolution to Civil War
14. Military Developments since 2012
15. Political Economy in the Civil War
16. The Kurdish Districts of Aleppo
17. The Kurdish Para-State in Rojava
18. Voices from Rojava
19. Conclusion: Rojava, Quo Vadis?
Bibliography
List of Interviews
Notes
Index