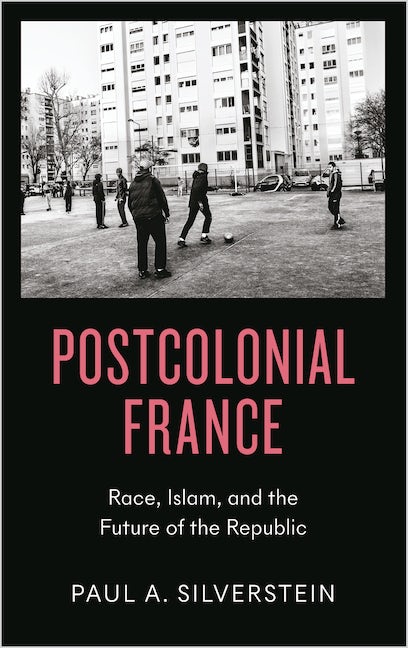 Race, Islam, and the Future of the Republic

Urban marginalisation, police violence and institutional discrimination in modern France
France is a bellwether for the postcolonial anxieties and populist politics emerging across the world today. This book explores the dynamics and dilemmas of the present moment of crisis and hope in France, through an exploration of recent moral panics.

Taking stock of the tensions as they have emerged over the last quarter of a century, Paul Silverstein looks at urban racial violence, female Islamic dress and male public prayer, anti-system gangster rap, and sporting performances in and around which debates over France's multicultural future have arisen. It traces these conflicts to the unresolved tensions of an imperial project, the present-day effects of which are still felt by many.

Despite the barriers, which include neo-nationalist racism and Islamophobia, French citizens of various backgrounds have found ways to build flourishing lives. Silverstein shows how they have responded to urban marginalisation, police violence and institutional discrimination in remarkably creative ways.

Paul Silverstein is Professor of Anthropology at Reed College, USA. He is author of Postcolonial France (Pluto, 2018) and Algeria in France: Transpolitics, Race and Nation (Indiana UP, 2004). He writes on identity politics, postcoloniality, and diasporic popular culture in France and North Africa.

'In this sweeping and erudite account, Paul Silverstein takes us a hundred years back to the colonial days before bringing us forward to the current era of La Haine, La Fouine, Zidane and Charlie Hebdo... a terrific introduction to French youth culture and the republic's unfinished struggle for egalite' - Hisham Aidi, author of Rebel Music: Race, Empire and the New Muslim Youth Culture (Pantheon), Winner of the American Book Award in 2015 'Paul Silverstein is one of the foremost living exponents of historical anthropology, and this is his masterpiece.' - Brian Klug, Senior Research Fellow in Philosophy, University of Oxford, Author of Being Jewish and Doing Justice 'Few people writing in English understand the complex situations - and the urgent stakes - of being Muslim in France today better than Paul Silverstein' - Moustafa Bayoumi, author of How Does it Feel to be a Problem? Being Young and Arab in America (Penguin) 'What Paul Silverstein offers here is an insightful analysis of French contemporary postcoloniality, which is group-based as well as individual-based ... his empirical and theoretical approach makes this very recommended reading to scholars and students of France alike' - Olivier Esteves, Assistant Professor in British Studies, Lille III university
Acknowledgements
List of Abbreviations
Glossary
Introduction: Whither Postcolonial France?
1. Mobile Subjects
2. How Does It Feel to Be the Crisis?
3. The Muslim and the Jew
4. Dangerous Signs: Charlie Hebdo and Dieudonne
5. Anxious Football
6. Tracing Places: Parkour and Urban Space
7. Hip-Hop Nations
Conclusion: Postcolonial Love
Notes
References
Index
Published by Pluto Press in May 2018
Paperback ISBN: 9780745337746
eBook ISBN: 9781786802972

France is a bellwether for postcolonial anxieties and populist politics. Football is the stage wherein these anxieties and politics often play out. How are the social and cultural contours of the nation represented during the 2018 World Cup?

END_OF_DOCUMENT_TOKEN_TO_BE_REPLACED
Back to Top
X