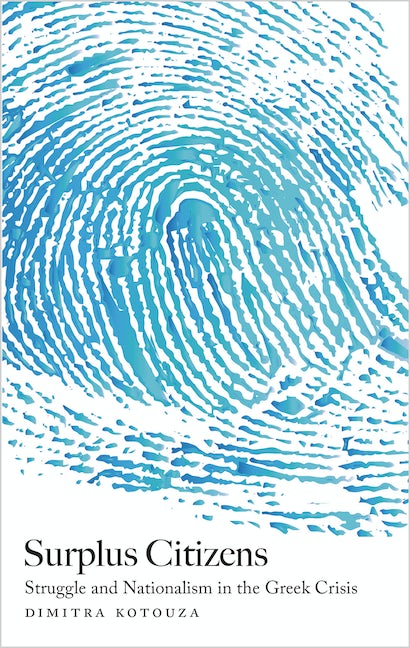 Struggle and Nationalism in the Greek Crisis

How grassroots movements have survived and thrived amidst a harsh political and economic crisis
The crisis in Greece has elicited the full spectrum of responses - from optimism for a left parliamentary politics inspired by Syriza's electoral victory, to pessimism about the intransigence of the EU and calls for the reinstatement of full national sovereignty in Europe.

In Surplus Citizens, Dimitra Kotouza questions the terms of the debate by demonstrating how the national framing of social contestation posed obstacles to transformative collective action, but also how this framing has been challenged. Analysing the increasing superfluousness of subordinate classes in Greece as part of a global phenomenon with racialised and gendered dimensions, the book interrogates the strengths, contradictions and limits of collective action and identity in the crisis, from the movement of the squares and neighbourhood assemblies, to new forms of labour activism, environmental struggles, immigrant protests, anti-fascism and pro-refugee activism.

Arguing against the strategic fixation on unified identities and pointing instead to the transformative potential of internal dispute within movements, Surplus Citizens highlights the relevance of a discussion of Greece to collective action beyond it, as we continue to traverse a global financial crisis that has provoked conflicts over nationalism, immigration and the rise of neo-fascism.

Dimitra Kotouza lectures in sociology and politics at universities in and around London, and is an editorial collective member of the journals Mute and Endnotes. She is a contributor to Beyond Crisis (PM Press 2018, ed. John Holloway et al.), Biopolitical Governance (Rowman & Littlefield 2018, ed. Hannah Richter) and the forthcoming What Is to Be Done Under Real Subsumption (Mute Books, ed. Anthony Iles and Mattin). Her writing has also appeared in academic journals and radical publications in English and Greek.

'An extraordinary achievement. Kotouza's incisive contribution to critical social theory and to the analysis of the contemporary dynamics of capitalist social relations should be read by all' - Werner Bonefeld, author of 'Critical Theory and the Critique of Political Economy: On Subversion and Negative Reason' 'In this original study, Kotouza powerfully shows how national social struggles, like the ones we witnessed in Greece in the aftermath of the global financial crisis of 2008, are littered with contradictions and exclusions. Nevertheless by taking the politics of the excluded as its horizon, Surplus Citizens offers us the hope of a more inclusive, transnational politics' - Elena Loizidou, Birkbeck University of London 'An extraordinary guide to our present' - Joshua Clover, author of 'Riot. Strike. Riot: The New Era of Uprisings' 'Breaking the ethno-national and state-centred cage into which discussions of the Greek crisis have largely been confined, Kotouza's book puts questions of race, gender and migration at the core of its analysis and provides us with a powerful model for investigating the dynamics and limits of contemporary surplus rebellions' - Alberto Toscano, author of 'Fanaticism: On the Uses of an Idea'

Acknowledgements
Note on Transliteration
List of Abbreviations
Introduction: Squares and Frontiers
PART I - HISTORIES: UNDEAD AND INVISIBLE CONFLICTS, TRANSFORMATIONS, CRISIS
1. The Making of Greek Capitalism through Race, Gender and Class
2. Victories, Defeats and Neoliberal Transformation, 1973–2008
3. Symptoms of Crisis
PART II - BECOMING SURPLUS: STRUGGLE AND ITS LIMITS
4. Social Struggle, Non-Identity and Popular Democracy
5. Citizens from Democracy to Riot
6. Labour and Superfluity
7. Solidarity, Charity or Exchange?
8. The Forest Against Work, Workers Against the Forest
9. Care, Vulnerability and Gender Politics
PART III - NATIONALISM, BIOPOLITICS AND STRUGGLE AT THE BORDERS
10. Everyday Racism, Crisis Nationalisms and Migrant ‘Autonomy’
11. Surplus Population Management by a Nation-State in Crisis
12. Nationalism from Below
13. Migrant Struggle and Anti-Fascism
Conclusion
Index