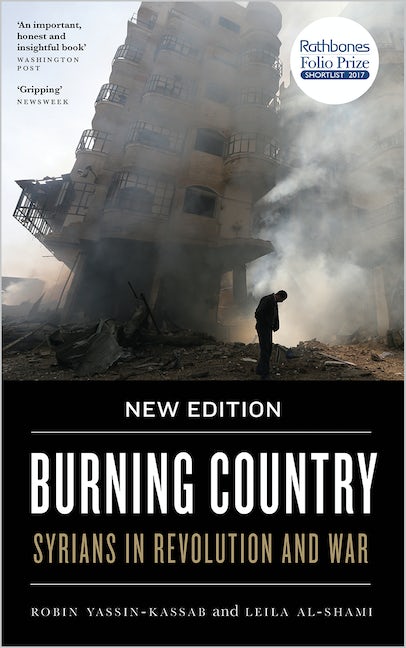 'The most succinct and convincing insider's narrative of the uprising'

'Extraordinary ... the book on Syria I was waiting for'

'Gripping ... Cutting through the fog of geopolitics, Burning Country refocuses the conflict with the people at its centre'

'Explores how Syria's peaceful uprising gave way to armed insurgency and sectarian jihad... This is an important, honest and insightful book, well worth anyone's time'

'Avoids the easy indulgence of indignation; instead, it elicits the voices of many different Syrians involved in the uprising, acknowledging their suffering as well as their courage, intelligence, and humanity, while explaining the terrible choices that have been forced on them'

'For decades Syrians have been forbidden from telling their own stories and the story of their country, but here Robin Yassin-Kassab and Leila al-Shami tell the Syrian story'

'By far the best account of the Syrian uprising yet'

- Dr. Yasser Munif, Professor of sociology at Emerson College, co-founder of the Global Campaign of Solidarity with the Syrian Revolution

List of Abbreviations
Acknowledgements
Preface
Maps
1. Revolution From Above
2. Bashaar’s First Decade
3. Revolution From Below
4. The Grassroots
5. Militarisation and Liberation
6. Scorched Earth: The Rise of the Islamisms
7. Dispossession and Exile
8. Culture Revolutionised
9. The Failure of the Elites
10. The Start of Solidarity
11. Syria Dismantled
Further Reading
Notes
Index

END_OF_DOCUMENT_TOKEN_TO_BE_REPLACED
Back to Top
X