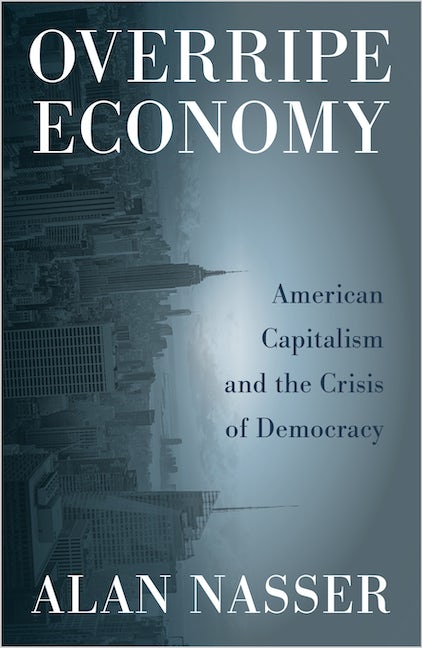 American Capitalism and the Crisis of Democracy

This is the history of the development of the profoundly undemocratic American Capitalism
From industrialisation to the present day, Overripe Economy is a genealogy of the emergence of a finance-ridden, authoritarian, austerity-plagued American capitalism.

This panoramic political-economic history of the country, surveys the ruthlessly competitive capitalism of the nineteenth century, the maturation of industrial capitalism in the 1920s, the rise and fall of capitalism's Golden Age and the ensuing decline towards the modern era. Alan Nasser shows why the emergence of the persistent austerity of financialised neoliberal capitalism is the natural outcome of mature capitalism's evolution, revealing both the key structural and political vulnerabilities of capitalism itself and points towards the kind of system that can transcend it.

At the centre of the argument, is capitalism's ultimatum: either a 'new normal' of persistent austerity, declining democracy and a privatised state, or a polity and economy characterised by an economic democracy that can ensure both higher wages and a shorter working week.

Alan Nasser was Professor Emeritus of Political Economy and Philosophy at The Evergreen State College in Olympia, WA and lectured at universities across the world, including Oxford University. His writing dealt with political and economic issues, as well as legal theory, philosophy and psychoanalysis. He was a frequent contributor to CounterPunch and Monthly Review, and was a member of the Union for Radical Political Economists. He is the author of Overripe Economy.

'We live in an age of mounting social inequality and declining political democracy. Overripe Economy offers a provocative analysis of these ills, based on a detailed reading of American history. Many will find Alan Nasser's arguments controversial. But we very much need to engage this analysis well as Nasser's case for a democratic socialist alternative' - David McNally, author of Monsters of the Market (2012) and Global Slump (2010) 'Offering an original analysis of late stage capitalism, this work connects the many individual grievances generated by capitalism into a powerful indictment of a system mired in social dislocation and repression. Nasser provides a resounding case for a sweeping transformation and reorganization of society on a fully democratic socialist footing' - Barry Finger, Editorial Member of New Politics

Acknowledgements
Introduction
1. The Nineteenth Century: Framework Stimulants, Destructive Competition and the Making of Oligopoly Capitalism
2. Working-Class Resistance, the State-Supported Capitalist Response, the Mechanization of Industry and the Defeat of Organized Labor
3. The 1920s: The Dynamics of Mature Industrial Capitalism
4. The 1930s and the Great Depression
5. The Rise and Fall of the Golden Age
6. The New Financialization: Debt, Investment and the Financialized Firm
7. The Landscape of Austerity: Polarization, the Destruction of Jobs, and the Emerging Police State
8. Conclusion
Appendix A: Economic Maturity and Disaccumulation – A Mildly Wonkish Summation
Appendix B: What Keynes Really Prescribed
Bibliography
Index

From industrialisation to the present day, Alan Nasser writes a genealogy of the emergence of America’s undemocratic, finance-ridden, authoritarian, austerity-plagued capitalism.

END_OF_DOCUMENT_TOKEN_TO_BE_REPLACED
Back to Top
X