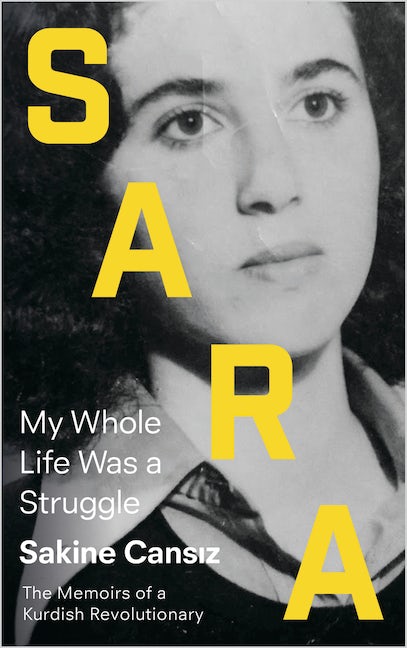 An iconic memoir by one of the first female fighters of the PKK
The bitter struggle of the Kurdistan Workers' Party, or PKK, against the Turkish state has delivered inspirational but often tragic stories. This memoir by Kurdish revolutionary Sakine Cansiz is one of them. Sakine, whose code name was 'Sara', co-founded the PKK in 1974 and dedicated her life to its cause. On the 9 January 2013 she was assassinated in Paris in circumstances that remain officially unresolved.

Today, 'Sara' is an inspiration to women fighting for liberation across the world. This is her story in her own words, and is in turns shocking, violent and path-breaking.

Sakine Cansiz was a Kurdish revolutionary, who was a leading member of the PKK, present at its first congress of 1978. She was imprisoned between 1980 and 1991 for her membership of the PKK. A close associate of Abdullah Ocalan, she was murdered in Paris in 2013.

'Sakine Cansiz was a true pioneer and one of the founders of a political movement whose story is far from over and whose latest chapters we witness unfolding in today's events in Turkey and Syria. This book is essential reading for anyone who wishes to understand the real motivates of this unique modern political movement' - Estella Schmid, Peace in Kurdistan Campaign 'A brilliant, passionate girl who discovers Kurdish politics in high school and flees her family, determined to become a revolutionary instead of a housewife - A riveting, inspiring book' - Meredith Tax, feminist activist and author of A Road Unforeseen: Women Fight the Islamic State (2016) 'Here is the story of a fearless Kurdish woman full of fight, who, with pain and resistance, resurrected and caused resurrection, who rebelled and caused rebellion, who became free and caused freedom. Her story is the story of Kurdistan, the story of Kurdish women, the story of Middle Eastern women. A story that renews itself with the consciousness of freedom' - Çiğdem Doğu, coordination of Kurdistan Women's Communities KJK

Founding member of the PKK, revolutionary, feminist, freedom fighter. Sakine Cansiz was many things, in this blog, we reflect upon the life and legacies of the ‘Kurdish Rosa Luxemburg’.

END_OF_DOCUMENT_TOKEN_TO_BE_REPLACED
Back to Top
X