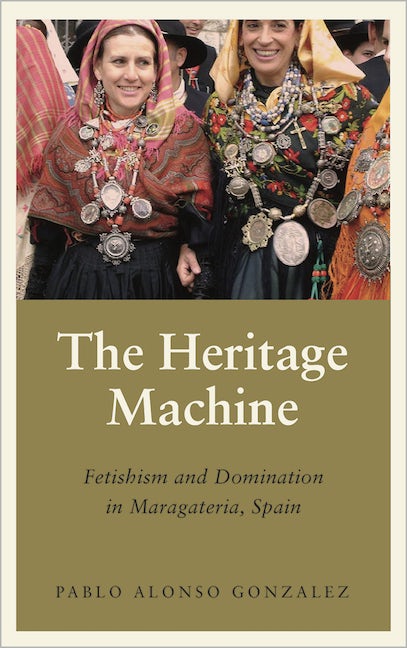 Fetishism and Domination in Maragateria, Spain

A radical critique of the heritage industries.
This book upturns the conventional understanding of heritage, challenging widespread notions about how we relate to and why we preserve the past.

Heritage research is often based on the assumption that heritage is something ‘given’ to us, that it is good and valuable in its own right. However, by looking at the historical and cultural roots of heritage and its development through the Enlightenment, modernity and capitalism, Pablo Alonso Gonzalez shows that it is in fact a system pervaded by fetishistic social relationships, embedded in capitalism, and not as benign as it appears.

Focusing on a case study in the region of Maragatería, Spain, Alonso Gonzalez explores the ethnic and racial discrimination towards the local population in the context of Spanish nationalism, and how this formed the region’s heritage today. By challenging mainstream scholarship in the field, The Heritage Machine rethinks the relations between heritage, ideology and capitalism.

Pablo Alonso Gonzalez is Tenure Track Researcher in Cultural Anthropology at the Higher Research Council of Spain (CSIC). He holds a PhD in history from the University of Leon in Spain and a PhD in archaeology and heritage studies from the University of Cambridge. His research addresses heritage as a political reality at the intersection between society and material culture from the past. He is the author of The Heritage Machine (Pluto, 2018) and Cuban Cultural Heritage (University Press of Florida, 2018).

'The Heritage Machine pushes us to question disciplinary boundaries through a well-crafted and critical analysis of 'heritage' that combines introspection with ethnographic approaches. Gonzalez's provocation in this book is radical' - Dante Angelo, Universidad de Tarapac, Chile 'Gonzalez identifies the varied and complex agency of a once despised and now exoticized population against the oppressive backdrop of Spanish nationalism and international neoliberalism. He thereby also throws down a provocative gauntlet to current assumptions in academic heritage discourse' - Michael Herzfeld, Ernest E. Monrad Professor of the Social Sciences, Harvard University 'An engaging and theoretically grounded analysis of 'heritage' as a form of relation in fetishist societies. Alonso offers an insightful ethnographic exploration while deconstructing the Maragato myth, one of the 'damned peoples' of Spain' - Cristina Sanchez-Carretero, Spanish National Research Council
List of Figures
Series Preface
1. Introduction
2. The Emergence of Heritage
3. Race, Ethnicity and Nationalism in Spain
4. The Subordination of Peasants in Maragateria
5. Before Heritage: 'Juntas Vecinales' and 'Tamboriteros'
6. Social Construction of Heritage in the Teleno Military Shooting Range
7. Pseudo-archaeology and the Critique of Heritage Epistemology
8. Return to the Countryside in Prada de la Sierra
9. The Heritage Machine in Val de San Lorenzo
10. The Spectacle of the Other and the Negation of Heritage
Bibilography
Index
Published by Pluto Press in Dec 2018
Hardcover ISBN: 9780745338071
eBook ISBN: 9781786803016