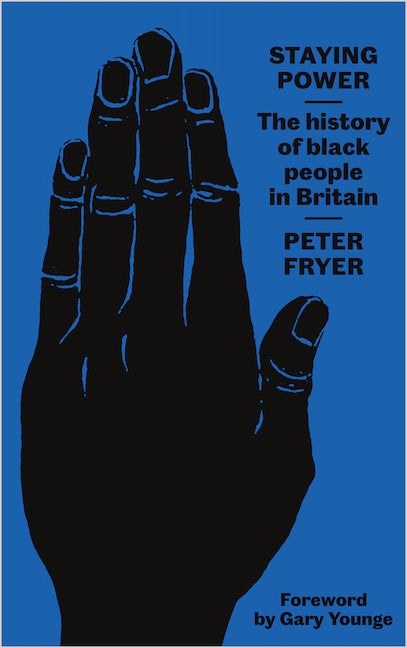 The classic history of black people in Britain, an epic story that spans the Roman conquest to the present day.
Staying Power is a panoramic history of black Britons. Stretching back to the Roman conquest, encompassing the court of Henry VIII, and following a host of characters from Mary Seacole to the abolitionist Olaudah Equiano, Peter Fryer paints a picture of two thousand years of Black presence in Britain.

First published in the '80s, amidst race riots and police brutality, Fryer's history performed a deeply political act; revealing how Africans, Asians and their descendants had long been erased from British history. By rewriting black Britons into the British story, showing where they influenced political traditions, social institutions and cultural life, was - and is - a deeply effective counter to a racist and nationalist agenda.

This new edition includes the classic introduction by Paul Gilroy, author of There Ain't No Black in the Union Jack, in addition to a brand-new foreword by Guardian journalist Gary Younge, which examines the book's continued significance today as we face Brexit and a revival of right wing nationalism.

Peter Fryer (1927-2006) was a British writer and journalist, whose coverage of the arrival of citizens from the Caribbean onboard the HMT Empire Windrush led to a deep and long-lasting interest in the histories of Black Britons. In 1984, he wrote the classic book Staying Power: The History of Black People in Britain (Pluto, 2018).

Gary Younge is a journalist, author and broadcaster. He is editor-at-large for The Guardian. His latest book is Another Day in the Death of America (Guardian Faber Publishing, 2017).

'Encyclopedic, courageous and passionately written there is no more important and no more ground breaking a book on Black British history than Staying Power. Everyone who has researched or written on the subject since its publication in 1984 owes something to Fryer'

- David Olusoga, author of 'Black and British: A Forgotten History' 'Wonderful' - Lenny Henry 'Rare in its mastery' - CLR James 'A fascinating account of the growth of the black community in Britain over the past centuries' - Guardian 'For this retrieval of the lost histories of black Britain Mr Fryer has my deep gratitude. An invaluable book, which manages the rare feat of combining scholarship with readability' - Salman Rushdie
Foreword by Gary Younge
Introduction by Paul Gilroy
Preface
1. 'Those Kinde of People'
2. 'Necessary Implements'
3. Britain's Slave Ports
4. The Black Community Takes Shape
5. Eighteenth-Century Voices
6. Slavery and the Law
7. The Rise of English Racism
8. Up from Slavery
9. Challenges to Empire
10. Under Attack
11. The Settlers
12. The New Generation
Appendices
Notes
Suggestions for Further Reading
Index
Published by Pluto Press in Sep 2018
Paperback ISBN: 9780745338309
eBook ISBN: 9781786803344

We speak to the broadcaster, historian and author David Olusoga about ‘Staying Power: The History of Black People in Britain’ and its significance today.

END_OF_DOCUMENT_TOKEN_TO_BE_REPLACED
Back to Top
X