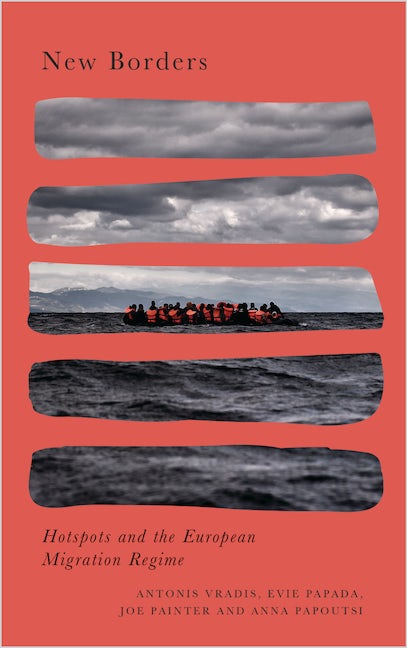 Hotspots and the European Migration Regime

How has the migrant crisis shaped Europe's borders?
To many, a border is a geographical fact. But what happens when a border is subject to an emergency? Today, as millions are forced to migrate due to war, famine and political unrest, it is important to analyse how states use new bordering techniques to control populations.

New Borders focuses on the Greek island of Lesbos. Since 2015, the island has come under intense scrutiny as more than one million people have disembarked on its shores.

During this time, the authors spent two years studying the changing meanings and functions of the EU's border. They observed how the reception of the refugees slid into detention and refuge became duress. Examining how and why this happened, they tackle questions on European policy, the securitisation of national and EU borders and the real impacts this has had on everyday life, determining who 'belongs' where and when.

Antonis Vradis is VC Fellow and Lecturer at Loughborough University.

Evie Papada is a researcher at Loughborough University.

Joe Painter is Professor of Geography at Durham University.

Anna Papoutsi is a researcher at the University of Birmingham.

'A significant contribution to the study of migration that challenges many of our assumptions about where borders are, how they work, and ultimately who is allowed to move' - Reece Jones, University of Hawaii, author of 'Violent Borders: Refugees and the Right to Move' 'This book offers a powerful take on the human consequences of bordering Europe. In shifting the reader's gaze from migrants themselves to the EU roll-out of unprecedented migration controls it builds a distressing picture of a perennial political 'migration emergency'... a text fit for our times, speaking back to the dangerous political common-sense in a forceful collective voice: an urgent read' - Ruben Andersson, author of 'Illegality, Inc.: Clandestine Migration and the Business of Bordering Europe' 'A collective, interdisciplinary, thoughtful, timely rendering of the new paradigm now governing how we live borders' - Alison Mountz, Balsillie School of International Affairs
List of Figures
Acknowledgements
Series Preface
Preface
Glossary
Introduction
1. The Where and When of Migration
2. Refuge, Rules and Rights
3. Governing Mobility
4. The Camps
5. The Sea is on Fire
Notes
Index
Published by Pluto Press in Nov 2018
Paperback ISBN: 9780745338453
eBook ISBN: 9781786803702