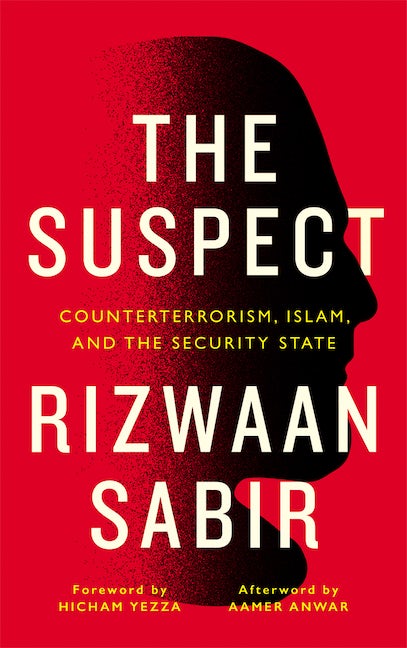 'An instant classic. Sabir is an inspiration' Arun Kundnani, author of The Muslims are Coming!

What impact has two decades' worth of policing and counterterrorism had on the state of mind of Muslims in Britain? The Suspect draws on the author's experiences to take the reader on a journey through British counterterrorism practices and the policing of Muslims.

Rizwaan Sabir describes what led to his arrest for suspected terrorism, his time in detention, and the surveillance he was subjected to on release from custody, including stop and search at the roadside, detentions at the border, monitoring by police and government departments, and an attempt by the UK military to recruit him into their psychological warfare unit.

Writing publicly for the first time about the traumatising mental health effects of these experiences, Sabir argues that these harmful outcomes are not the result of errors in government planning, but the consequences of using a counterinsurgency warfare approach to fight terrorism and police Muslims. To resist the injustice of these policies and practices, we need to centre our lived experiences and build networks of solidarity and support.

Rizwaan Sabir is a Lecturer in Criminology at Liverpool John Moores University in the UK. His research, which is focused on examining British counterterrorism, was motivated by his wrongful arrest and detention for suspected terrorism when he was found in possession of the Al-Qaeda Training Manual he downloaded for his postgraduate research. In addition to briefing policymakers such as the Shadow Home Secretary, the United Nations, civil society and community groups as well as lawyers, he offers analysis and commentary in the broadcast and written media including BBC News, Sky News, and Al-Jazeera.

Hicham Yezza is a writer, editor and researcher based in Britain. He is the founder of Ceasefire Magazine, and is a contributor to outlets including the Guardian, Le Monde Diplomatique and openDemocracy.

Aamer Anwar is an award-winning lawyer who has worked on some of Scotland’s highest profile cases, including an appeal on the Lockerbie conviction, and defends victims and their families from police violence and discrimination. He is the Rector at the University of Glasgow.

'In this compelling journey Sabir spells out the excruciating process of being made an extension of the 'war on terror'. Were he an employee of a pogrom pushing, state suckling think-tank, he may have a show on LBC, a column in The Times or even an OBE by now. Instead, he has complex trauma and the shadow of an invasive and voyeuristic state surveillance stalking him. Sabir's writing shows with such clarity and eloquence how communities of struggle can resist and fight back. Thank you for raising your voice and persevering in the face of state violence'

'An instant classic. No other book portrays the traumatising effects of British state violence with more power or lucidity. Sabir's struggle to resist and overcome injustice is an inspiration'

- Arun Kundnani, author of 'The Muslims are Coming! Islamophobia, Extremism, and the Domestic War on Terror'

'Discussions of Islamophobia are greatly deficient when they fail to tackle the ways in which the Muslim community has been perpetually securitised in uniquely nefarious ways. Rizwaan offers a compelling breakdown of what that has looked like through his own tragic experience'

- Lisa Stampnitzky, Lecturer in Politics at the University of Sheffield and author of 'Disciplining Terror: How Experts Invented Terrorism'

'A story as gripping as a thriller, a powerful account of the mechanisms and dangers of our highly dysfunctional counter-terrorism regime'

'A tour de force, unique in its combination of rigorous scholarship and the knowledge that comes from personal experience'

'Among countless books about the harms and damage of the global war on terror, 'The Suspect' stands out for its searing honesty, its courage and its powerful insights into the inner workings of contemporary counterterrorism'

‘Brave ... through personal testimony, The Suspect reveals in gripping detail the destructive cost of the War on Terror for Muslims around the world’

What impact has two decades’ worth of policing and counterterrorism had on the state of mind of Muslims in Britain? The Suspect draws on the author’s experiences to take the reader on a journey through British counterterrorism...

END_OF_DOCUMENT_TOKEN_TO_BE_REPLACED
Back to Top
X