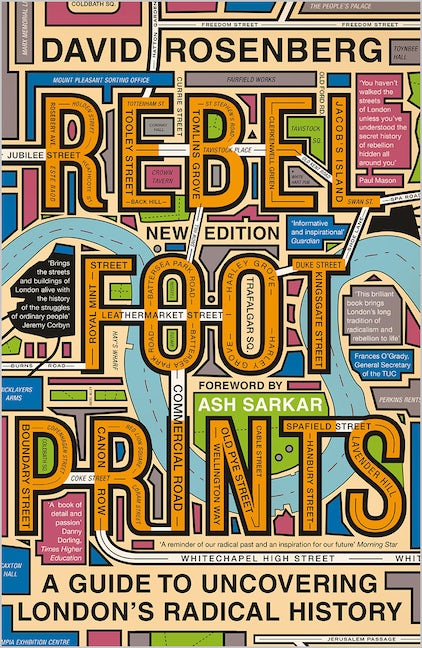 The classic walking guide for the intrepid radical in London.

The radical response to conservative heritage tours and banal day-tripper guides, Rebel Footprints brings to life the history of social movements in the capital. Transporting readers from well-known landmarks to history-making hidden corners, David Rosenberg tells the story of protest and struggle in London from the early nineteenth to the mid-twentieth century.

From the suffragettes to the socialists, from the Chartists to the trade unionists, the book invites us to step into the footprints of a diverse cast of dedicated fighters for social justice.

Self-directed walks pair with narratives that seamlessly blend history, politics and geography, and beautifully illustrated maps immerse the reader in the story of the city. Whether you are visiting it for the first time, or born and raised in it, Rosenberg invites you to see London as you never have before: the nation’s capital as its radical centre.

David Rosenberg is an educator, writer and tour guide, and author of Rebel Footprints (Pluto, 2015) and Battle for the East End (Five Leaves, 2011). Since 2008, he has led tours of key sites in London's social and political history.

'David has brought the streets and buildings of London alive to the real history of the city and the struggles of ordinary people. Anyone reading this will walk the streets of our city with a different view of the world, and what people can do when they act together'

'Informative and well-judged ... There is so much that is inspirational in this book'

'A book of detail and passion'

'You haven't walked the streets of London unless you've understood the secret history of revolt, rebellion and poverty hidden all around you in its bricks and alleyways. Rosenberg takes you there as no other writer has done'

'By offering us a guide to our radical past, Rosenberg reminds us of the strong tradition of dissent that has shaped our history and made us who we are'

'Stirs my heart's old sympathies with the idealism of the radical Left. I still urge you to let Rosenberg take you on his London journey'

This brilliant book brings London's long tradition of radicalism and rebellion to life. Using walks to show how dissent led to democracy, it is a fitting testimonial to the collective struggles of Londoners of every colour and creed. I for one will be dusting down my walking shoes and taking to the streets to find out more

Acknowledgements
Foreword by Ash Sarkar
Introduction: Rebellious City
1. Writers and Rioters in the Fleet Street Precinct
2. Trailblazers for Democracy in Clerkenwell Green
3. The Spark of Rebellion in Bow
4. Coming in from the Cold: Immigrant Agitators and Radicals in Spitalfields
5. No Gods, No Masters: Radical Bloomsbury
6. Life on the Boundary: Fighting for Housing in Bethnal Green and Shoreditch
7. Stirrings from the South: The Battersea Four
8. Speaking Truth to Power: Suffragettes and Westminster
9. Not Afraid of the Prison Walls: Rebel Women and Men of Poplar
10. People's Power in Bermondsey
11. No Pasaran! Cable Street and Long Lane
Conclusion
Bibliography
Index

VIDEO: Jeremy Corbyn on ‘Rebel Footprints’ and the value of people’s history

Jeremy Corbyn speaks at the book launch for the new edition of Rebel Footprints (Pluto, 2019) at Conway Hall, March 2019.

This month we discuss radical history with two people whose writing, activism and guided tours celebrate the individuals, communities and movements that have shaped London.

I stand with Jeremy Corbyn

In the week that Jeremy Corbyn was suspended from the Labour Party, David Rosenberg looks back to the times he showed up and stood up for the oppressed in his community.

END_OF_DOCUMENT_TOKEN_TO_BE_REPLACED
Back to Top
X