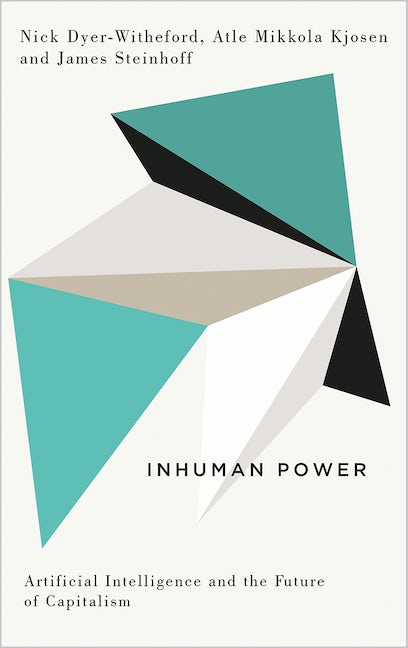 Artificial Intelligence and the Future of Capitalism

An exploration of the relationship between Marxist theory and Artificial Intelligence.
Artificial Intelligence (AI) has seen major advances in recent years. While machines were always central to the Marxist analysis of capitalism, AI is a new kind of machine that Marx could not have anticipated. Contemporary machine-learning AI allows machines to increasingly approach human capacities for perception and reasoning in narrow domains.

This book explores the relationship between Marxist theory and AI through the lenses of different theoretical concepts, including surplus-value, labour, the general conditions of production, class composition and surplus population. It argues against left accelerationism and post-Operaismo thinkers, asserting that a deeper analysis of AI produces a more complex and disturbing picture of capitalism's future than has previously been identified.

Inhuman Power argues that on its current trajectory, AI represents an ultimate weapon for capital. It will render humanity obsolete or turn it into a species of transhumans working for a wage until the heat death of the universe; a fate that is only avoidable by communist revolution.

Nick Dyer-Witheford is an Associate Professor in the Faculty of Information and Media Studies at University of Western Ontario. He is author of Cyber-Marx (University of Illinois, 1999), and co-author of Digital Play (McGill-Queen's, 2003), Games of Empire (University of Minnesota Press, 2009) Cyber-Proletariat (Pluto, 2015), and the co-author of Inhuman Power (Pluto, 2019).

Atle Mikkola Kjøsen is Assistant Professor in the Faculty of Information and Media Studies at the University of Western Ontario. He researches and has published on artificial intelligence and on the intersection between Marxist political economy, media theory, logistics, and retailing. He is the co-author of Inhuman Power (Pluto, 2019).

James Steinhoff is a PhD Candidate in the Faculty of Information and Media Studies at the University of Western Ontario. His dissertation is about work in the artificial intelligence industry, and he has published on the philosophical connections between Marxism and transhumanism, artificial intelligence, and media theory. He is the co-author of Inhuman Power (Pluto, 2019).

'Indispensable reading for all those who want to understand the relationship between artificial intelligence and capitalism' - Christian Fuchs, author of 'Digital Demagogue: Authoritarian Capitalism in the Age of Trump and Twitter' 'A radical and provocative reading. The authors' criticisms of left accelerationism are timely and persuasive, their conclusion is bracing but necessary.' - Sarah Kember, author of 'iMedia: The Gendering of Objects, Environments and Smart Materials' 'A fascinating and pioneering work that deploys Marx to understand contemporary AI capitalism. An exemplary contribution to understanding how machine learning is changing our world and transforming communist strategy' - Nick Srnicek, author of 'Platform Capitalism' 'A disturbing but essential addition to the rapidly growing literature on the risks posed by capitalist-conceived AI' - Morning Star