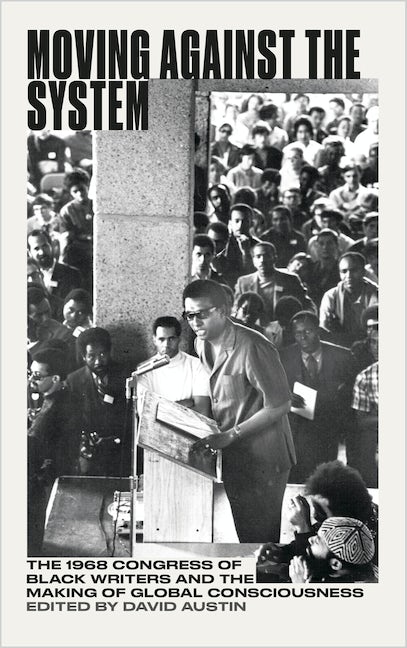 Moving Against the System

A revolutionary collection of black radical thought from a historic event in 1968.
In 1968, as protests shook France and war raged in Vietnam, the giants of black radical politics descended on Montreal to discuss the unique challenges and struggles facing their black comrades all over the world.

Against a backdrop of widespread racism in the West and ongoing colonialism and imperialism in the Global South, this group of activists, writers, and political figures gathered to discuss the history and struggles of people of African descent and the meaning of black power.

For the first time since 1968, David Austin brings alive the speeches and debates of the most important international gathering of black radicals of the era. With never-before-seen texts from Stokely Carmichael, Walter Rodney and C.L.R. James, these documents will prove invaluable to anyone interested in black radical thought and political activism of the 1960s.

David Austin is the author of Dread Poetry and Freedom: Linton Kwesi Johnson and the Unfinished Revolution (Pluto, 2018) and the editor of Moving Against the System, The 1968 Congress of Black Writers and the Making of Global Consciousness (Pluto, 2018). He is the winner of the 2014 Casa de las Americas Prize.

'The Congress of Black Writers marks one of the most important gatherings of radical intellectuals in the 20th century... Where else can you find the likes of C.L.R. James, Walter Rodney, Richard B. Moore, James Forman, Stokely Carmichael, Robert Hill and others, talking revolution to an engaged and sometimes combative crowd? I couldn't put the book down' - Robin D. G. Kelley, author of 'Freedom Dreams: The Black Radical Imagination' 'Moving Against The System is a carefully constructed montage of the leadership , dynamics, and substance of what became an international "Movement". It is a revelatory portrait of the past that is no less revealing of the political dynamics and potential of today's "Black Live Matter", "#MeToo", and other activist efforts . A must read' - Harry Edwards, Prof. Emeritus, Univ. of California, Berkeley; Consultant: NFL, NBA 'Austin provides a wonderful contextual and critical Introduction making the contributions of CLR James, Robert Hill, Walter Rodney, James Forman, Stokely Carmichael and many others not only relevant to but also very much alive for contemporary movement theory and practice. A must read for all those concerned with anti-racist revolutionary social transformation today' - Gary Kinsman, gay liberation and anti-capitalist activist, co-author of 'The Canadian War on Queers: National Security as Sexual Regulation' 'Moving Against the System powerfully reminds us of the depth and breadth of the Black radical tradition and its profound, enduring contributions to anti-imperialist thought and action. At a time when such acute insights are badly needed, Austin suggests critical ways to engage with these ideas and histories, to educate and inform today’s struggles to change the system' - Aziz Choudry, Canada Research Chair in Social Movement Learning and Knowledge Production, McGill University 'It is simply extraordinary to read, fifty years later, this collection. Not only has David Austin expertly introduced the interventions of some of the 20th century's most important intellectuals and militants, these texts remind us of a time when the struggles against racism, capitalism, and imperialism converged on a global scale and advanced a project for liberation... a project which remains central and necessary today' - Asad Haider, author of 'Mistaken Identity: Race and Class in the Age of Trump' 'This remarkable collections gathers electric essays from a critical site of the making of a 'global 1968'. Masterfully introduced, it includes the work of leading pan-African thinkers and freedom fighters gathered at the most important North American intellectual event of that critical year. The histories and dilemmas that they dissect are ones with which we still very much live' - David Roediger, author of 'Class, Race, and Marxism' 'This collection is a treasure chest of Canadian, Caribbean, and African diasporic history. And David Austin is a remarkable archivist, curator, detective and analyst of this decisive moment' - Karen Dubinsky, Professor, Global Development Studies and History Queen's University 'David Austin has done a tremendous service by bringing together this brilliant and inspiring collection from the Congress of Black Writers... With white supremacy on the rise once again, the insights contained here provide a vital guide to the waging of revolutionary anti-racist praxis on a global scale' - Sunera Thobani, Department of Asian Studies, University of British Columbia; author of 'Exalted Subjects: Studies in the Making of Race and Nation in Canada' 'Reading Moving Against the System as an activist and organiser is to experience time folding in on itself ... much of our struggles today are informed in part by some of the men whose speeches and arguments appear here ... the documentation of this incredibly important Congress in an accessible book format is sure to remain relevant and instructive for years to come' - Sandra Hudson, co-founder of Black Lives Matter - Toronto 'With the groundbreaking publication of key selections from the 1968 Congress of Black Writers and David Austin's in-depth explanation of the gathering's context and significance 'Moving Against the System' speaks to us across five decades with great eloquence and power' - Max Elbaum, author of 'Revolution in the Air: Sixties Radicals Turn to Lenin, Mao and Che'
Acknowledgements
Introduction: The Dialect of Liberation: The Congress of Black Writers at 50 and Beyond - David Austin
1. The Psychology of Subjection: Race Relations in the United States of America - Alvin Poussaint
2. The Haitian Revolution and the History of Slave Revolt - C. L. R. James
3. The Fathers of the Modern Revolt: Marcus Garvey and the Origins of Black Power - Robert Hill
4. African History in the Service of the Black Liberation - Walter Rodney
5. The Civilizations of Ancient Africa - Richard B. Moore
6. Black History in the Americas - Richard B. Moore
7. Race in Britain and the Way Out - Richard Small
8. Moving Against the System: New Directions for the Black Struggle - Harry Edwards
9. Frantz Fanon and the Third World - James Forman
10. Black Power in the USA - Stokely Carmichael
11. 'A Black Woman Speaks Out' - Barbara Jones
12. 'You Don't Play with Revolution': Interview with C. L. R. James - Michael Smith
13. On the Banning of Walter Rodney from Jamaica - C. L. R. James at Montreal Rally
14. Letter to C. L. R. James from Rosie Douglas, June 9, 1968
15. Letter to Rosie Douglas from C. L. R. James, June 27, 1968
Notes
Index
Published by Pluto Press in Sep 2018
Paperback ISBN: 9780745338651
eBook ISBN: 9781786803795

VIDEO: The 1968 Congress of Black Writers

In this short video, David Austin, editor of the new book Moving Against the System, talks about one of the most important political events in the history of Black radicalism, which took place in Montreal in October 1968.

Black Power in the U.S.A.
At the 1968 Congress of Black Writers

Against a backdrop of racism in the West and colonialism and imperialism in the Global South, Stokeley Carmichael speechifies at the 1968 Congress of Black Writers, the most important gathering of black radicals of the era.

The Radical Politics and Poetics of Linton Kwesi Johnson

Linton Kwesi Johnson fought ‘sus’ laws, stood on picketlines, and put pen to paper to refute W.H. Auden’s claim that ‘poetry makes nothing happen’. In this blog, David Austin considers the relationship between his poetry and politics.

END_OF_DOCUMENT_TOKEN_TO_BE_REPLACED
Back to Top
X