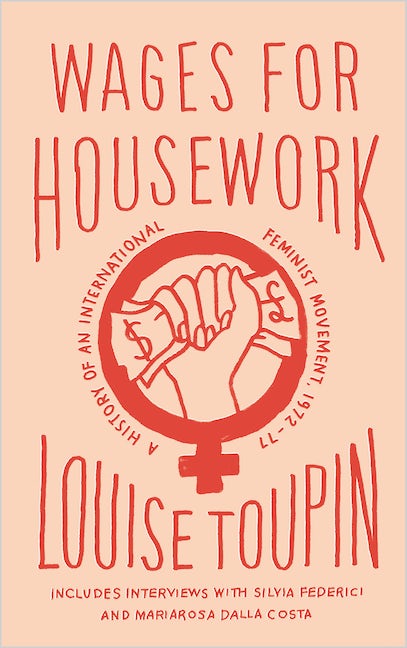 A History of an International Feminist Movement, 1972-77

A history of the feminist movement that changed how we see women's work forever
Revolutionary feminism is resurging across the world. But what were its origins? In the early 1970s, the International Feminist Collective began to organise around the call for recognition of the different forms of labour performed by women. They paved the way for the influential and controversial feminist campaign 'Wages for Housework' which made great strides towards driving debates in social reproduction and the gendered aspects of labour.

Drawing on extensive archival research, Louise Toupin looks at the history of this movement between 1972 and 1977, featuring unpublished conversations with some of its founders including Silvia Federici and Mariarosa Dalla Costa, as well as activists from Italy, Germany, Switzerland, the United States and Canada. Encompassing rich theoretical traditions, including autonomism, anti-colonialism and feminism, whilst challenging both classical Marxism and the mainstream women's movement, the book highlights the power and originality of the campaign.

Among their many innovations, these pathbreaking activists approached gender, sexuality, race and class together in a way that anticipated intersectionality and had a radical new understanding of sex work.

Louise Toupin taught Political Science at University of Quebec in Montreal. She was a member of the Quebec Women's Liberation Front (1969-1971), and co-authored numerous anthologies of activist and feminist writings.

'An important resource for students of the bold and brilliant 1970s wages for housework movement' - Kathi Weeks, author of The Problem with Work: Feminism, Marxism, Antiwork Politics and Postwork Imaginaries 'This is a precise reconstruction of a legendary and almost-forgotten feminist campaign in Europe and North America. It includes a broad and balanced analysis of the theoretical background of the claim for wages for housework as well as of the controversies around it. An exciting and well-written memory of the 1970s!' - Gisela Bock, Professor at the Free University Berlin

List of Illustrations
Introduction: A Political and Personal History
Part I: The International Feminist Collective: Historical Overview and Political Perspective
1. 1972: Wages for Housework in the Universe of Feminism
2. A Wage as a Lever for Power: The Political Perspective
3. The International Feminist Collective, 1972–77
Part II: Mobilizations around Women’s Invisible Work
Overview
4. Mobilizations around Women’s Invisible Work in the Home
5. Mobilizations around Women’s Invisible Work Outside the Home
6. Mobilizations by Groups on the Periphery of the Network
Conclusion
Afterword – From Yesterday to Today: The Intellectual Journeys of Mariarosa Dalla Costa and Silvia Federici, from 1977 to 2013
Interview with Mariarosa Dalla Costa
Interview with Silvia Federici
Acknowledgments
Notes
Selected Bibliography
Index

The History of Wages for Housework

Revolutionary feminism is resurging across the world. But what were its origins? Louise Toupin retells the history of ‘Wages for Housework’ which made advanced debates in social reproduction and the gendered aspects of labour.

END_OF_DOCUMENT_TOKEN_TO_BE_REPLACED
Back to Top
X