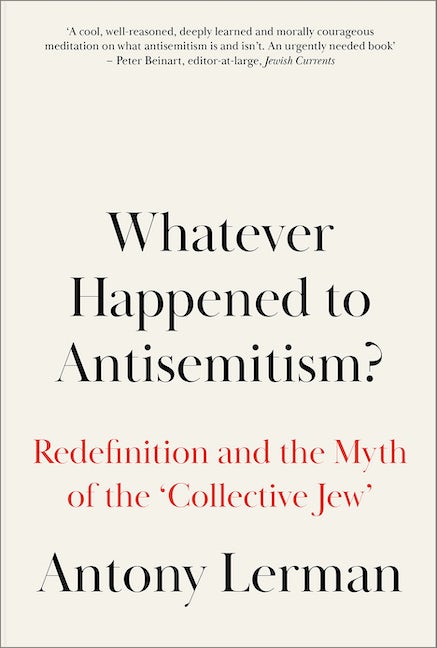 Whatever Happened to Antisemitism?

Redefinition and the Myth of the 'Collective Jew'

A clear-sighted exploration of how antisemitism has been politicised, and the damaging consequences of its redefinition

'This elegantly written, erudite book is essential reading for all of us, whatever our identifications' - Lynne Segal

Antisemitism is one of the most controversial topics of our time. The public, academics, journalists, activists and Jewish people themselves are divided over its meaning. Antony Lerman shows that this is a result of a 30-year process of redefinition of the phenomenon, casting Israel, problematically defined as the ‘persecuted collective Jew’, as one of its main targets.

This political project has taken the notion of the ‘new antisemitism’ and codified it in the flawed International Holocaust Remembrance Alliance’s ‘working definition’ of antisemitism. This text is the glue holding together an international network comprising the Israeli government, pro-Israel advocacy groups, Zionist organisations, Jewish communal defence bodies and sympathetic governments fighting a war against those who would criticise Israel.

The consequences of this redefinition have been alarming, supressing free speech on Palestine/Israel, legitimising Islamophobic right-wing forces, and politicising principled opposition to antisemitism.

'Nobody unpacks the confusions currently circulating around antisemitism, nor the complexities of Jewish identity, better than Antony Lerman. This elegantly written, erudite book is essential reading for all of us, whatever our identifications'

'An urgently needed book. The contemporary debate about antisemitism is both incoherent and appalling. Faced with this hot mess, Antony Lerman offers a cool, well-reasoned, deeply learned and morally courageous meditation on what antisemitism is and isn't'

'We desperately need this book [...] An essential tool to understand the weaponisation of antisemitism and its dangerous impact on free speech, Palestinian rights, and the very real threat of actual antisemitism'

'This important, essential book by a leading expert on antisemitism offers a nuanced history of the use and abuse of the fight against the world's oldest hatred. It powerfully unmasks the successful effort to twist the battle against antisemitism into a defense of the indefensible: Israel's subjugation of millions of people on the basis of their national and ethnic identity'

- Nathan Thrall, author of 'The Only Language They Understand'

- Neve Gordon, co-author of 'The Human Right to Dominate'