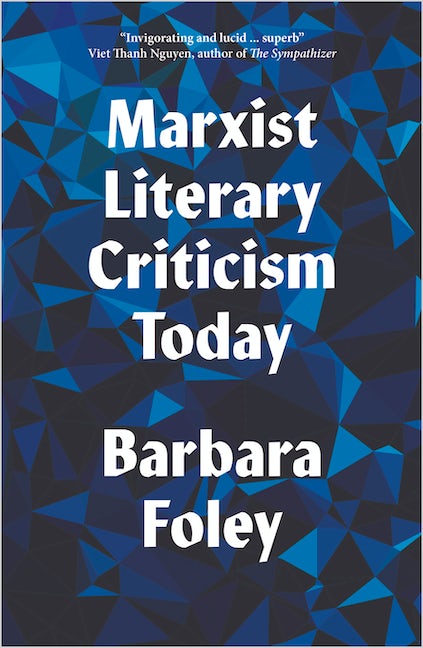 A compelling and accessible textbook, by a pre-eminent Marxist literary critic.

*Shortlisted for the Isaac Deutscher Prize 2019*

Why Marxism? Why today? In the first introduction to Marxist literary criticism to be published in decades, Barbara Foley argues that Marxism continues to offer the best framework for exploring the relationship between literature and society.

She lays out in clear terms the principal aspects of Marxist methodology - historical materialism, political economy and ideology critique - as well as key debates, among Marxists and non-Marxists alike, about the nature of literature and the goals of literary criticism and pedagogy.

Foley examines through the empowering lens of Marxism a wide range of texts: from Jane Austen's Pride and Prejudice to E. L. James's Fifty Shades of Grey; from Frederick Douglass's 'What to the Slave Is the Fourth of July?' to Annie Proulx's 'Brokeback Mountain'; from W.B. Yeats's 'The Second Coming' to Claude McKay's 'If We Must Die'.

Barbara Foley is Distinguished Professor of English at Rutgers University, Newark. She has published widely in the fields of Marxist criticism, US literary radicalism, and African American literature. Her books include Marxist Literary Criticism Today (Pluto, 2019), Wrestling with the Left: The Making of Ralph Ellison's Invisible Man (Duke University Press, 2010) and Spectres of 1919: Class and Nation in the Making of the New Negro (University of Illinois Press, 2003).

'Invigorating and lucid - a fine introduction to Marxism in general and to Marxist literary criticism. Foley has done a superb job writing a book that is useful both for novices and for teachers who wish to show how literature is inescapably connected to the material world' - Viet Thanh Nguyen, author of 'The Sympathizer'

'Widely surveying contemporary critical theory and practice, Barbara Foley's magisterial book demonstrates the crucial significance of Marxism to our historical moment, and it will be a valuable resource for students, critics, and activists for years to come' - Robert T. Tally Jr., Texas State University

'Foley deftly sketches the lineaments of traditional Marxism, then some main interests of traditional criticism, and then shows in readings of literary texts what depth of insight comes from conjoining the two traditions. I warmly recommend this book especially for those who want to change the world as well as interpret it' - Richard Ohmann, Wesleyan University

'This is a book many have longed for. Readers of literature will find Foley's lucid exposition of Marxist criticism an invaluable guide.' - Rosemary Hennessy, Rice University

'Foley has produced a work of great erudition which spans a colourful and vast selection of examples from literature past and present. In addition, her analysis is informed by a strong understanding of Marxist philosophy and economics which shows how the works she explores are shaped by the necessity and the contradictions of their historical origins. Finally, all this is brought across in the lively and incisive style of a teacher who genuinely enjoys the ebb and flow of discussion and debate. I think it is fair to say &lsquo;Marxist Literary Criticism Today&rsquo; is an excellent work of literature in its own right' - Culture Matters