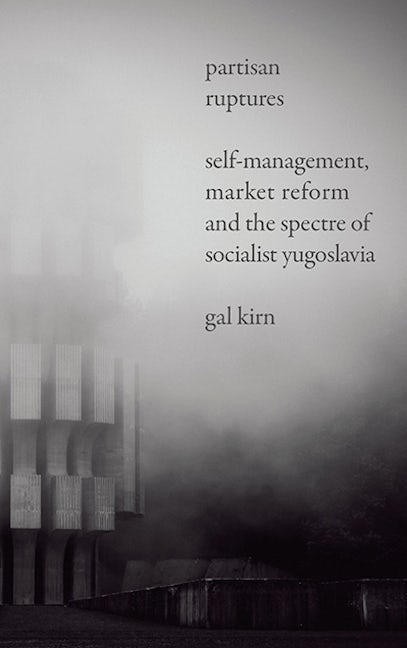 Self-Management, Market Reform and the Spectre of Socialist Yugoslavia

A history of twentieth-century Yugoslavia and the ruptures that shaped it
Yugoslavia's twentieth-century bore witness to civil war, sharp ideological struggles and a series of 'partisan ruptures'; revolutionary events that changed the face of Yugoslavian society, politics and culture, which were felt on a global level.

This book is a comprehensive historical and political analysis of the three major ruptures; the People's Liberation Struggle during World War Two, the self-management model and the Non-Aligned Movement. In order to understand what provoked and what came out of these revolutionary ruptures, Gal Kirn examines the implications of communism and socialism's productive relationship, the Yugoslavian 'experiment' of market socialism that marked the political and economic shift towards 'post-socialism' already in the 1960s, which crystallised new class coalitions that will later on - together with austerity politics - lead the way towards des-integration of Yugoslavia.

Filling a much-needed gap in English language literature, this book's interrogation of the Yugoslav socialist experiment offers insights for left projects and democratic socialist discussions today, as well as historians of Yugoslavia and revolutionary movements.

Gal Kirn is an open topic fellow at TU Dresden. He was previously a researcher at the JvE Academie in Maastricht, a research fellow at ICI Berlin and a fellow at Stuttgart's Akademie Schloss Solitude. He has edited books on neoliberalism, Althusser, Yugoslav black wave cinema and theories of post-Fordism. He is currently finishing the book The Partisan Counter Archive and editing a book on riots.

List of Illustrations
Preface
Introduction: Beyond the Spectrum of Partisan and Socialist Yugoslavia
1. On Partisan Rupture as a Revolutionary Process: Tito Versus Schmitt
2. A Brief Outline of the End of the Kingdom of Yugoslavia and the Partisan Beginnings of World War II
3. Partisan Rupture I: The People’s Liberation Struggle
4. Split with Stalin: A New Road to Socialism?
5. Partisan Rupture II: The Road to the Non-Aligned Movement
6. Partisan Rupture III: Yugoslav Road to Self-Management Socialism
7. A Short Introduction to the Recent Studies of Socialist Yugoslavia
8. The Main Characteristics of Early Yugoslav Socialism
9. The 1965 Market Reform: From Decentralised Planning to the Logic of Capital
10. Separation I: Split within Companies, or Class Struggles from Below
11. Separation II: Competition between Companies and Financialisation, or Class Struggles from Above
12. Socialist Reproduction and Self-Management Ideology in Yugoslavia in 1968 and Beyond
13. The Contradictory Movement of Socialist Civil Society in Slovenia during the 1980s: The Beginning of the End of Yugoslavia
Conclusion: After the 1991 Yugoslav Deluge, the Rise of the New Europe
Notes
Bibliography
Index

Gal Kirn compares the iconoclasm on the post-communist 1990’s to today’s anti-racist protests, revealing a world that is shifting to the side of the oppressed.

END_OF_DOCUMENT_TOKEN_TO_BE_REPLACED
Back to Top
X