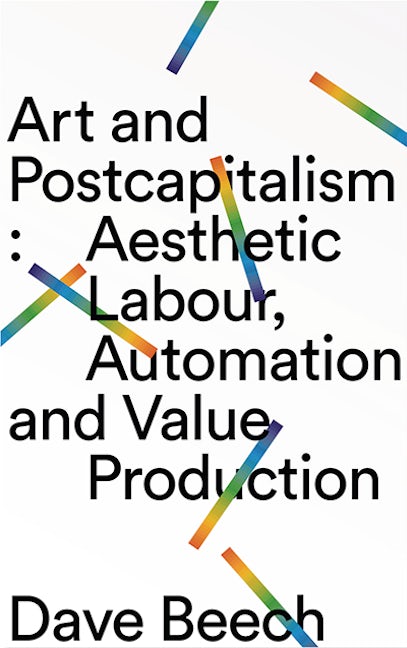 What can art tell us about a postcapitalist future?
Artistic labour was exemplary for Utopian Socialist theories of 'attractive labour', and Marxist theories of 'nonalienated labour', but the rise of the anti-work movement and current theories of 'fully automated luxury communism' have seen art topple from its privileged place within the left's political imaginary as the artist has been reconceived as a prototype of the precarious 24/7 worker.

Art and Postcapitalism argues that art remains essential for thinking about the intersection of labour, capitalism and postcapitalism not insofar as it merges work and pleasure but as an example of noncapitalist production. Reassessing the contemporary politics of work by revisiting debates about art, technology and in the nineteenth and twentieth century, Dave Beech challenges the aesthetics of labour in John Ruskin, William Morris and Oscar Wilde with a value theory of the supersession of capitalism that sheds light on the anti-work theory by Silvia Federici, Andre Gorz, Kathi Weeks and Maurizio Lazzarato, as well as the technological Cockayne of Srnicek and Williams and Paul Mason.

Formulating a critique of contemporary postcapitalism, and developing a new understanding of art and labour within the political project of the supersession of value production, this book is essential for activists, scholars and anyone interested in the real and imagined escape routes from capitalism.

Dave Beech is Professor of Art at Valand Academy, University of Gothenburg. He is the author of Art and Value: Art's Economic Exceptionalism in Classical, Neoclassical and Marxist Economics (Brill 2015) which was shortlisted for the Deutscher Memorial Prize. He co-authored The Philistine Controversy (Verso, 2002) and Art and Text (Blackdog Books, 2011). He is a founding co-editor of the journal Art and the Public Sphere.

Acknowledgements
Introduction: Postcapitalism, Critique and Art
1. What is Postcapitalism?
2. Art’s Hostility to Capitalism
3. Artists and the Politics of Work
4. Avant-Gardism and the Meanings of Automation
5. Laziness and the Technologies of Rest
Conclusion: Gratuity, Digitalisation and Value
Notes
Bibliography
Index