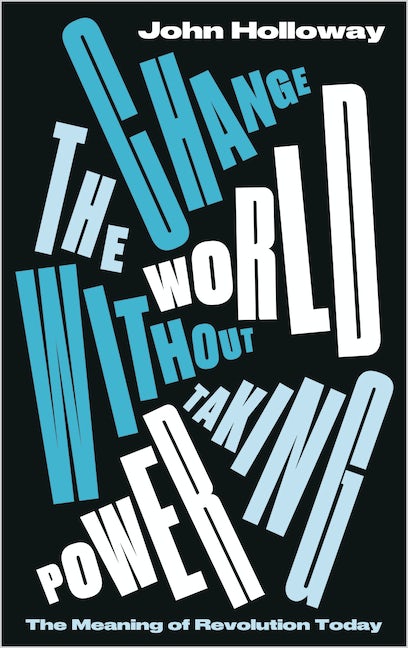 Change the World Without Taking Power

The Meaning of Revolution Today

A classic thought-experiment in the true meaning of resistance.
This book is a profound search for a theory of social change. Through clearing away the cobwebs of revolutionary socialism, it renews the fight for the ending of capitalism and the construction of a new, fairer world.

After a century of failed attempts by radical projects, the concept of revolution itself is in crisis. By asking the deepest questions about the nature of humanity, work, capitalism, organisation and resistance, John Holloway looks sharply at modern protest movements and provides tools for creating new strategies.

First published in 2002, this book marked a shift in the understanding of Autonomism, Anarchism and Marxism, addressing the doubts activists had in their own political history and work, and helped form the perspectives of a new generation who are today changing the world.

'This is a most compelling book. A must read, and already a classic' - Werner Bonefeld, The University of York 'This book has transformed the way we think about radical change. While reading Holloway's masterpiece, if you feel that everything you had previously thought about in relation to Marxism and revolution had been ill-conceived, you are not alone!' - Ana Cecilia Dinerstein, University of Bath 'A refreshing, thought provoking book ... A must read for every student and practitioner of political science' - USI Journal 'A beautiful but strange book' - Antonio Negri 'This book should not only be thought of as a masterful contribution to critical theory in the speculative mode of Hegel, Bloch, or Adorno; it is intended, rather, as a contribution to revolutionary practice. John Holloway is one of the most important revolutionary theorists of our time' - Andrej Grubacic, California Institute of Integral Studies 'The first edition of this book was published at the time of the Argentine popular rebellion, the second during Occupy Wall Street and the Movements of the Squares...let this edition be the one that ushers in the era of the new commons' - Marina Sitrin, SUNY Binghamton University

Acknowledgements
Preface to the Fourth Edition
Preface to the Third Edition
Preface to the First Edition
1. The Scream
2. Beyond the State?
3. Beyond Power?
4. Fetishism: The Tragic Dilemma
5. Fetishism and Fetishisation
6. Anti-Fetishism and Criticism
7. The Tradition of Scientific Marxism
8. The Critical-Revolutionary Subject
9. The Material Reality of Anti-Power
10. The Material Reality of Anti-Power and the Crisis of Capital
11. Revolution?
Epilogue: Moving Against and Beyond: Reflections on a Discussion
Notes
Bibliography
Name Index
Subject Index