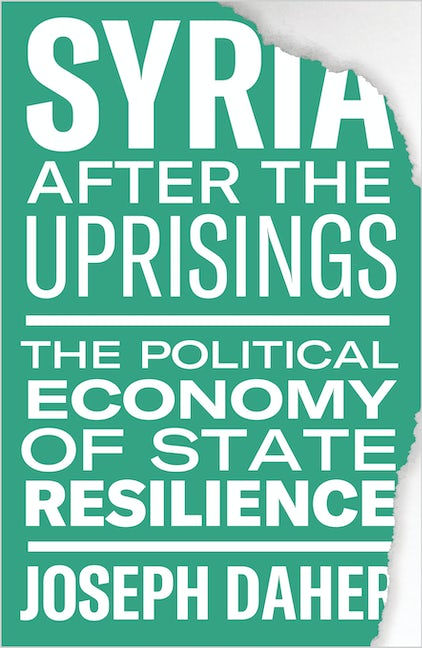 Syria after the Uprisings

The Political Economy of State Resilience

Eight years on, Syria is still a battleground. Why has the state remained so strong?

Syria has been at the centre of world news since 2011, following the beginnings of a popular uprising in the country and its subsequent violent repression. Eight years on, Joseph Daher analyses the resilience of the regime and the failings of the uprising, while also taking a closer look at the counter-revolutionary processes that have been undermining the uprising from without and within.

Through a sharp reconstruction of the key historical developments, Daher focuses on the reasons behind the transition of a peaceful uprising into a destructive war with multiple regional and international actors. He argues that other approaches have so far neglected a global analysis of the conflict’s economic, social and political characteristics. He also shows that it is impossible to understand the Syrian uprising without a historical perspective dating back to the seizure of power by Hafez al-Assad in 1970.

A result of years of research and discussions with activists, students, members of political parties and Syrian academics, this book will be the go-to analysis of Syria for years to come.

'Way beyond superficial and partial accounts of the Syrian uprising and civil war, Joseph Daher explores here comprehensively and in depth their roots, dynamics and tragic outcome, without giving up his hope of democratic and social change in his martyred country' - Gilbert Achcar, author of 'The People Want: A Radical Exploration of the Arab Uprising'

'A superb, timely and much needed book about the Syrian uprising. Moving between international politics, regional strategies, and local struggles, Daher provides a powerful and sobering account of what has happened in Syria since 2011. This is a penetrating analysis of a tragic yet inspiring revolt' - Yasser Munif, Emerson College

Introduction
1. The Construction of a Patrimonial Regime
2. Popular Uprising and Militarization
3. The Regime’s Repression
4. The Failure of the Opposition: The Challenges of Fundamentalism and Sectarianism
5. The Kurdish Question In Syria
6. Syria, International Relations and Interventions
7. War Economy, Reconstruction and Challenges
Conclusion
Published by Pluto Press in Jun 2019
Paperback ISBN: 9780745339382
Hardcover ISBN: 9780745339399
eBook ISBN: 9781786804648