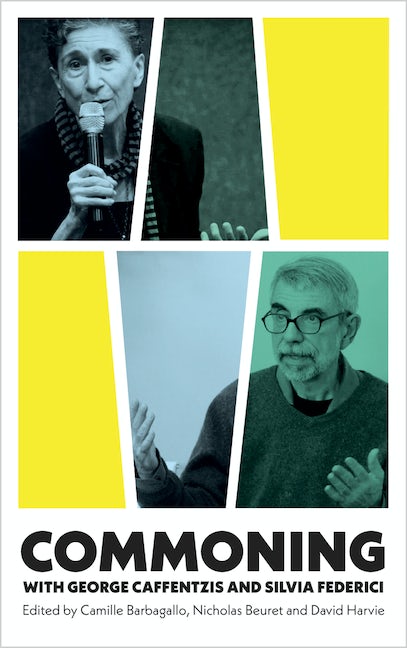 A passionate collection rediscovering the work of two giants of autonomist Marxism and feminism.

This collection explores key themes in the contemporary critique of political economy, in honour of the work and practice of Silvia Federici and George Caffentzis - two of the most significant contemporary theorists of capitalism and anti-capitalism, whose contributions span half a century of struggle, crisis and debate.

Drawing together a collection of essays that assess Federici and Caffentzis's contributions, offering critical and comradely reflections and commentary that build on their scholarship, this volume acts as a guide to their work, while also taking us beyond it. The book is organised around five key themes: revolutionary histories, reproduction, money and value, commons, and struggles.

Ultimately, the book shines light on the continuing relevance of Caffentzis and Federici's work in the twenty-first century for understanding anti-capitalism, 'primitive accumulation' and the commons, feminism, reproductive labour and Marx's value theory.

Camille Barbagallo is a postdoctoral research associate on women and work at the University of Kent. Her forthcoming book is Mothers and Others: The Politics of Reproduction in Neoliberal Britain (MUP, 2019). She is the editor of Women and the Subversion of the Community: A Mariarosa Dalla Costa Reader (PM Press, 2018) and an organiser of the International Women's Strike.

Nicholas Beuret is a Lecturer in Management and Ecological Sustainability at the University of Essex. His research has been published in journals including Antipode, Science and Culture and South Atlantic Quarterly.

David Harvie is an Associate Professor in Finance and Political Economy at the University of Leicester. He is co-author of Moments of Excess: Movements, Protest and Everyday Life (PM Press, 2011) and co-editor of What Could It Mean to Win? (PM Press, 2010).

'In this labour of love, radical theory joins passionate praxis to honour the social thought and political vision of Silva Federici and George Caffentzis, whose work together and apart offers hope that another world can be made'

'The path breaking work of Caffentzis and Federici is continually generative for contemporary anticapitalist thinkers and activists because it is at once critical and visionary. This fine collection of essays pays homage to their writing not through mere praise, but by putting their ideas to work toward the ongoing struggle for new understandings and better worlds'

'We need comrades with a clear sight and an open, affective heart. Many of us have found in George Caffentzis and Silvia Federici that company... And here they are, to celebrate them, with an exceptional cohort of intellectuals/activists, with compas, who are saying today what needs to be said to continue the struggle, to resist the horror and to create a new world'

'No one has taught us more that communism is with us than George Caffentzis and Silvia Federici... the greatest living theorists of commoning'

- Stefano Harney, co-author of 'The Undercommons'

'This collection offers an extraordinary kaleidoscope of critical reflections on social reproduction and class struggle. More than that, it is fitting testimony to the inspiration and grounding that Silvia and George continue to provide for those seeking a life beyond the sway of capital'