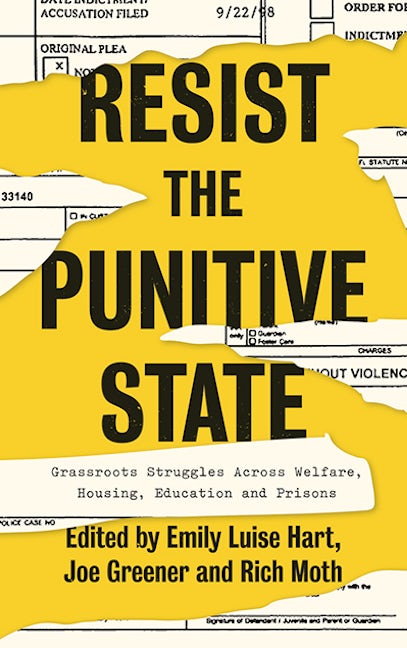 But state violence and corporate harm always meet with resistance. With contributions from a wide range of activists and scholars, Resist the Punitive State highlights and theorises the front line of resistance movements actively opposing the state-corporate nexus. The chapters engage with different strategies of resistance in a variety of movements and campaigns. In doing so the book considers what we can learn from involvement in grassroots struggles, and contributes to contemporary debates around the role and significance of subversive knowledge and engaged scholarship in activism.

Aimed at activists and campaigners plus students, researchers and educators in criminology, social policy, sociology, social work and the social sciences more broadly, Resist the Punitive State not only presents critiques of a range of harmful state-corporate policy agendas but situates these in the context of social movement struggles fighting for political transformation and alternative futures.

Emily Luise Hart is a Lecturer in Criminology at the University of Liverpool. Her research takes a critical and abolitionist approach to the study of prisons; women offenders; forms of prisoner resistance and desistance from crime. She is co-editor of New Perspectives on Desistance: Theoretical and Empirical Developments (Palgrave, 2017) and is a campaigner for Community Action on Prison Expansion (CAPE) and a Trade Union activist.

Joe Greener is Lecturer in Social Policy and Criminology at the University of Liverpool in Singapore. Joe has been an active campaigner in several anti-austerity campaigns in Liverpool. His research interests broadly address critical perspectives on welfare policy and criminology in Singapore and the United Kingdom. More specifically, recent research has focused on the social care crisis, prisons and the impact of privatisation.

Rich Moth is a Senior Lecturer in Social Work at Liverpool Hope University. Rich has been involved in a number of mental health, welfare and anti-austerity campaigns over recent years, and is a member of the national steering committee of activist group the Social Work Action Network (SWAN). He is author of Understanding Mental Distress: Knowledge and Practice in Neoliberal Mental Health Services (Policy Press, 2019), and an Associate Editor of Critical and Radical Social Work journal.