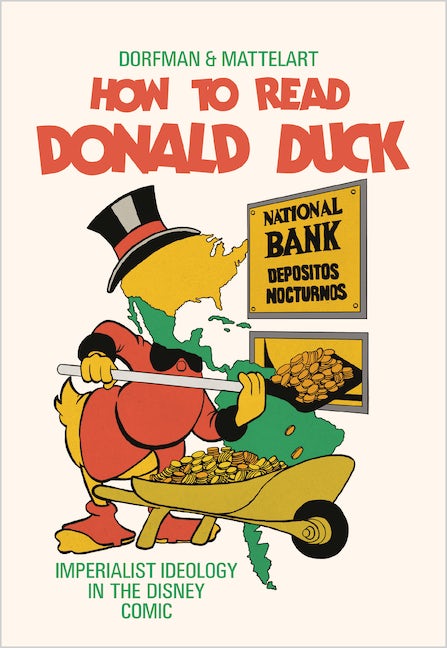 How to Read Donald Duck

Imperialist Ideology in the Disney Comic

by Ariel Dorfman and Armand Mattelart

Censored and condemned, this is a Marxist critique of how our favourite cartoons are vehicles for capitalist ideology.
First published in 1971, How to Read Donald Duck shocked readers by revealing how capitalist ideology operates in our most beloved cartoons. Having survived bonfires, impounding and being dumped into the ocean by the Chilean army, this controversial book is once again back on our shelves.

Written and published during the blossoming of Salvador Allende's revolutionary socialism, the book examines how Disney comics not only reflect capitalist ideology, but are active agents working in this ideology's favour. Focusing on the hapless mice and ducks of Disney, curiously parentless, marginalised and always short of cash, Ariel Dorfman and Armand Mattelart expose how these characters established hegemonic ideas about capital, race, gender and the relationship between developed countries and the Third World.

A devastating indictment of a media giant, a document of twentieth-century political upheaval, and a reminder of the dark undercurrent of pop culture, How to Read Donald Duck is once again available, together with a new introduction by Ariel Dorfman.

Ariel Dorfman is a Chilean American writer. His works include the Laurence Olivier award-winning play Death and the Maiden.

Armand Mattelart is a Belgian sociologist and well-known as a Leftist French scholar. His work deals with media, culture and communication, particularly in their historical and international dimensions.

'A handbook of de-colonization' - John Berger 'The book has a rambunctious humor that complements its polemical spirit . . . As Disney has evolved from an animation studio into a corporate behemoth—with theme parks, a cruise line, and content streaming around the world—How to Read Donald Duck and its charge of cultural imperialism rings all the truer' - New Yorker

Introduction To The Fourth Edition - Ariel Dorfman
Preface To The English Edition - Ariel Dorfman & Armand Mattelart
Introduction To The English Edition - David Kunzle
Apology For Duckology
Introduction: Instructions On How To Become A General In The Disneyland Club
I. Uncle, Buy Me A Contraceptive …
II. From The Child To The Noble Savage
III. From The Noble Savage To The Third World
IV. The Great Parachutist
V. The Ideas Machine
VI. The Age Of The Dead Statues
Conclusion: Power To Donald Duck?
Selected Bibliography
Appendix:
Donald Duck Vs. Chilean Socialism:
A Fair Use Exchange
John Shelton Lawrence
Endnotes