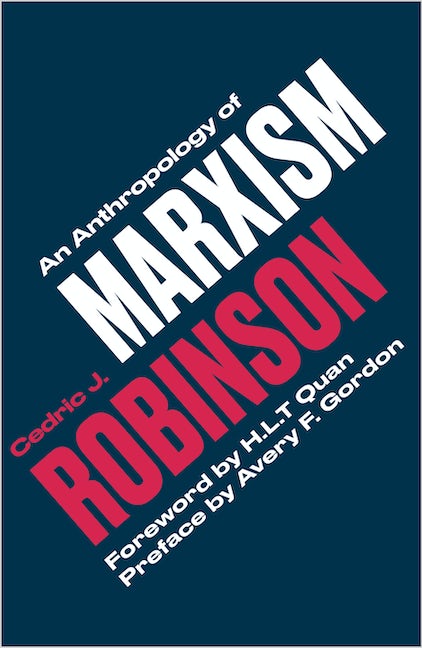 An Anthropology of Marxism

A major work on Marxism by one of the world’s most influential black scholars
Cedric Robinson was one of the most important and influential Black radical scholars of recent times, best known for the pathbreaking Black Marxism: The Making of the Black Radical Tradition. In this late major work, he turns his attention to European radical traditions and explores a genealogy of emancipatory thought and practice that predates Marxism and capitalism itself, and which continues to guide struggles for liberation today.

Accompanied by a foreword by H. L.T. Quan and a preface by Avery Gordon, this invaluable text reimagines the communal ideal from a broader perspective that transcends modernity, industrialisation and capitalism.

'Cedric Robinson was a great and wonderful man and a brilliant scholar. Everything he wrote is of incalculable value and 'An Anthropology of Marxism' is no exception' - Fred Moten, New York University 'Like W. E. B. Du Bois, Michel Foucault, Sylvia Wynter, and Edward Said, Robinson was that rare polymath capable of seeing the whole - its genesis as well as its possible future. No discipline could contain him. No geography or era was beyond his reach ... He left behind a body of work to which we must return constantly and urgently' - Robin D.G. Kelley, author of 'Freedom Dreams: The Black Radical Imagination' 'Before the movement for black lives made black radicalism cool for millennials, Cedric Robinson did the work of excavating an intellectual history we rely upon today' - The Root

Foreword by H. L. T. Quan
Preface by Avery F. Gordon
1. Coming to Terms with Marxian Taxonomy
2. The Social Origins of Materialism and Socialism
3. German Critical Philosophy and Marx
4. The Discourse on Economics
5. Reality and Its Representation
Notes
Index