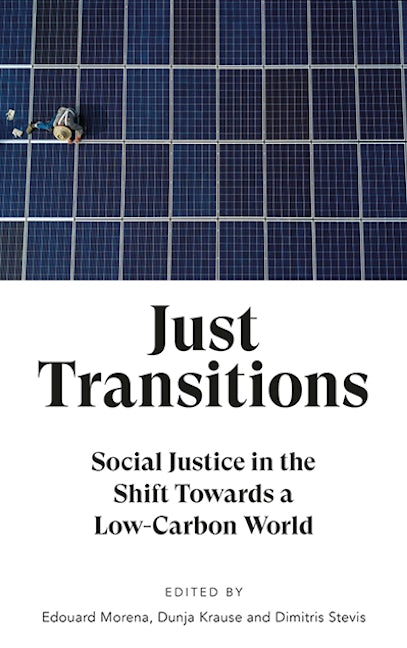 Social Justice in the Shift Towards a Low-Carbon World

How can we secure jobs in the shift towards sustainable production?
In the field of 'climate change', no terrain goes uncontested. The terminological tug of war between activists and corporations, scientists and governments, has seen radical notions of 'sustainability' emptied of urgency and subordinated to the interests of capital. 'Just Transition' is the latest such battleground, and the conceptual keystone of the post-COP21 climate policy world. But what does it really mean?

Just Transition emerged as a framework developed within the trade union movement to encompass a range of social interventions needed to secure workers' and frontline communities' jobs and livelihoods as economies shift to sustainable production. Just Transitions draws on a range of perspectives from the global North and South to interrogate the overlaps, synergies and tensions between various understandings of the Just Transition approach. As the concept is entering the mainstream, has it lost its radical edge, and if so, can it be recovered?

Written by academics and activists from around the globe, this unique edited collection is the first book entirely devoted to Just Transition.

Edouard Morena is a Lecturer in French and European Politics at the University of London Institute in Paris (ULIP). Co-coordinator of the Just Transition Research Collaborative (JTRC), his research focuses on social and justice issues in the international climate regime through the study of different non-state actors' involvement in the UNFCCC.

Dunja Krause is a Research Officer at the United Nations Research Institute for Social Development (UNRISD), where she leads the work on social dimensions of climate change, she coordinates the Institute’s work on just transition and conducts research on transformative adaptation in coastal cities.

Dimitris Stevis is professor of politics at Colorado State University. His research focuses on global labour and environmental politics, with particular attention to labour environmentalism and social and ecological justice. He is a founder of the Environmental Justice Working Group and co-edited an issue of the journal Globalizations .

'Just Transition has become a broad concept providing justification for very different interest groups. Going back to its roots, the authors of this book recover its radical edge by showing what Just Transition means within a concrete social context. Essential reading for anyone interested in understanding the true meaning of the concept'

'Just Transitions gets the politics, economics, and the morality right - this book shows us the way!'

- Joseph B. Uehlein, Founding President of the Labor Network for Sustainability

'This brilliant book demonstrates how the concept of a 'just transition' has become a battlefield. It should be at the heart of a powerful narrative strengthening justice and sustainability; instead it is appropriated by powerful forces blocking the revolutionary change that the climate crisis requires. Readers will be forced to choose sides'

- Jacklyn Cock, author of 'The War Against Ourselves Nature, Power and Justice'

'Would forestalling a climate catastrophe lead to a crisis for workers? Just Transitions provides historical perspective, thoughtful analysis, and revealing case studies demonstrating that a just transition for workers is difficult, but indeed possible'

- Jeremy Brecher, author of 'Against Doom: A Climate Insurgency Manual'

'This path breaking volume validates the concept of a Just Transition while intellectually combating attempts to appropriate it and empty it of its transformative potential. If you are serious about climate politics this is an essential read'

- Vishwas Satgar, Principal Investigator for Emancipatory Futures Studies at the University of Witwatersrand

'When Just Transition is discussed by governments and academics, what it means for workers who experience the effects of climate change and for unions who are responsible for protecting their members' rights often gets lost. This collection of excellent papers seeks to explore who the term is for, and the politics underlying the concept'

- David Uzzell, co-editor of 'Trade Unions in the Green Economy: Working for the Environment'

'To tackle the climate crisis without tackling social inequality will be impossible. 'Just transition' is meant as a concept to integrate both crises. Covering countries around the world, this work lays out why both crises need to be confronted simultaneously and how this might be achieved'

- Nora Rathzel, co-author of 'Transnational Corporations from the Standpoint of Workers'

'This book puts the demand for a Just Transition right at the heart of the discussion around the Green New Deal. It situates the need for internationalism and demonstrates how a radical vision of Just Transition can ensure that workers in neither the global North nor the global South end up being sacrificed in the name of the climate emergency'