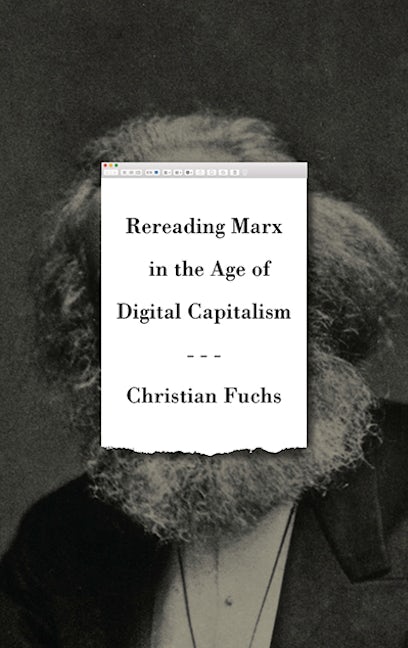 Rereading Marx in the Age of Digital Capitalism

In order to fight capitalism in the digital age, we must understand Marx!

The 'end of history' has not taken place. Ideological and economic crisis and the status quo of neoliberal capitalism since 2008 demand a renewed engagement with Marx. But if we are to effectively resist capitalism we must truly understand Marx: Marxism today must theorise how communication technologies, media representation and digitalisation have come to define contemporary capitalism. There is an urgent need for critical, Marxian-inspired knowledge as a foundation for changing the world and the way we communicate from digital capitalism towards communicative socialism and digital communism.

Rereading Marx in the Age of Digital Capitalism does exactly this. Delving into Marx's most influential works, such as Capital, The Grundrisse, Economic and Philosophic Manuscripts, The German Ideology and The Communist Manifesto, Christian Fuchs draws out Marx's concepts of machinery, technology, communication and ideology, all of which anticipate major themes of the digital age.

A concise and coherent work of Marxist media and communication theory, the book ultimately demonstrates the relevance of Marx to an age of digital and communicative capitalism.

'Christian Fuchs is the world's foremost Marxist analyst of contemporary capitalist media. With this important book, he demonstrates not just why Marx remains vital to understanding the world; he puts Marx to use in helping us figure out how to change it' - Jodi Dean, author of 'The Communist Horizon'

'A 'creative renewal' of Marx, emphasising his relevance for digital capitalism. The concepts Fuchs revisits are essential to a critical media and communication theory for the twenty-first century. A must reread!' - Janet Wasko, President of the International Association for Media and Communication Research

'Christian Fuchs is among the most important critical theorists of communication writing today, Rereading Marx in the Age of Digital Capitalism one of his most appealing books. Its fusion of deep Marxist scholarship with highly contemporary case studies, ranging from digital automation to new thinking about anti-capitalist struggle, is not to be missed' - Nick Dyer-Witheford, author of 'Cyber-Proletariat: Global Labour in the Digital Vortex'

'Societies change with the pace of developments in technology and revolutionary practices. The contradictions that capital presently experiences arise with increasing frequency in the structures of communication and technology. Fuchs rereads Marx in the present, in that tangle of explosive contradictions, indicating with clarity and force the necessary path of theoretical militancy today' - Antonio Negri, author of 'Political Descartes: Reason, Ideology and the Bourgeois Project'