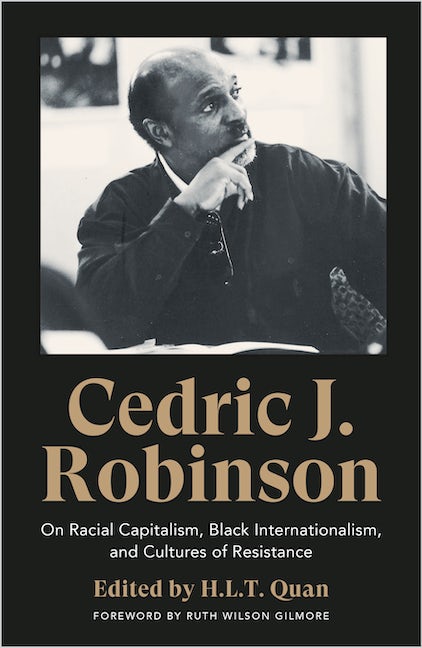 On Racial Capitalism, Black Internationalism, and Cultures of Resistance

A collection of essays by the influential founder of the black radical tradition
Cedric J. Robinson is considered one of the doyens of Black Studies and a pioneer in study of the Black Radical Tradition. His works have been essential texts, deconstructing racial capitalism and inspiring insurgent movements from Ferguson to the West Bank.

For the first time, Robinson's essays come together, spanning over four decades and reflective of his diverse interests in the interconnections between culture and politics, radical social theory and classic and modern political philosophy. Themes explored include Africa and Black internationalism, World politics, race and US Foreign Policy, representations of blackness in popular culture, and reflections on popular resistance to racial capitalism, white supremacy and more.

Accompanied by an introduction by H. L. T. Quan and a foreword by Ruth Wilson Gilmore, this collection, which includes previously unpublished materials, extends the many contributions by a giant in Black radical thought.

Ruth Wilson Gilmore is Professor of Geography at the Graduate Center of the City University of New York and the associate director of the Center for Place, Culture and Politics. She is the author of Golden Gulag: Prisons, Surplus, Crisis, and Opposition in Globalizing California, and has served as the chair of the American Studies Association and received the 'Angela Davis Award for Public Scholarship'.

'Before the movement for black lives made black radicalism cool for millennials, Cedric Robinson did the work of excavating an intellectual history we rely upon today' - The Root 'Like W. E. B. Du Bois, Michel Foucault, Sylvia Wynter, and Edward Said, Robinson was that rare polymath capable of seeing the whole - its genesis as well as its possible future. No discipline could contain him. No geography or era was beyond his reach.... He left behind a body of work to which we must return constantly and urgently' - Robin D. G. Kelley, author of 'Freedom Dreams: The Black Radical Imagination'

‘Through these essays, we see further evidence of Robinson’s profound faith in the ability of ordinary people to fight against the corruptions of a world that routinely mocks the logic and practice of democracy. In them, we get a clear sense of what Robinson insisted in his work from the outset: that Black freedom struggles are a central part of resisting today’s violent racial and capitalist order’

Foreword by Ruth Wilson Gilmore
Preface by Elizabeth Peters Robinson
Introduction: Looking for Grace in Redemption - H. L. T. Quan
Part I - On Africa and Black Internationalism
1. Notes Toward a “Native” Theory of History
2. In Search of a Pan-African Commonwealth
3. The Black Detective and American Memory
Part II - On Bourgeois Historiography
4. “The First Attack is an Attack on Culture”
5. Oliver Cromwell Cox and the Historiography of the West
6. Fascism and the Intersections of Capitalism, Racialism, and Historical Consciousness
7. Ota Benga’s Flight Through Geronimo’s Eyes: Tales of Science and Multiculturalism
8. Slavery and the Platonic Origins of Anti-democracy
Part III - On World Politics and U.S. Foreign Policy
9. Fascism and the Response of Black Radical Theorists
10. Africa: In Hock to History and the Banks
11. The Comedy of Terror
12. Ralph Bunche and An American Dilemma
Part IV - On Reality and Its (Mis)Representations
13. White Signs in Black Times: The Politics of Representation in Dominant Texts
14. The American Press and the Repairing of the Philippines
15. On the Los Angeles Times, Crack Cocaine, and the Rampart Division Scandal
16. Micheaux Lynches the Mammy
17. Blaxploitation and the Misrepresentation of Liberation
18. The Mulatta on Film: From Hollywood to the Mexican Revolution
19. Ventriloquizing Blackness: Eugene O’Neill and Irish-American Racial Performance
Part V - On Resistance and Redemption
20. Malcolm Little as a Charismatic Leader
21. The Appropriation of Frantz Fanon
22. Amilcar Cabral and the Dialectic of Portuguese Colonialism
23. Race, Capitalism, and the Anti-democracy
24. David Walker and the Precepts of Black Studies
25. The Killing in Ferguson
26. On the Truth and Reconciliation Commission
Index