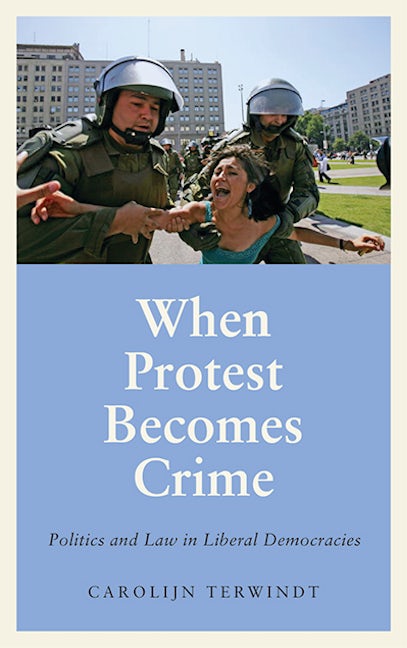 Politics and Law in Liberal Democracies

How our political and legal systems criminalise protesters

How does protest become criminalised? Applying an anthropological perspective to political and legal conflicts, Carolijn Terwindt urges us to critically question the underlying interests and logic of prosecuting protesters.

The book draws upon ethnographic research in Chile, Spain, and the United States to trace prosecutorial narratives in three protracted contentious episodes in liberal democracies. Terwindt examines the conflict between Chilean landowners and the indigenous Mapuche people, the Spanish state and the Basque independence movement, and the United States' criminalisation of 'eco-terrorists.' Exploring how patterns and mechanisms of prosecutorial narrative emerge through distinct political, social and democratic contexts, Terwindt shines a light on how prosecutorial narratives in each episode changed significantly over time.

Challenging the law and justice system and warning against relying on criminal law to deal with socio-political conflicts, Terwindt's observations have implications for a wide range of actors and constituencies, including social movement activists, scholars, and prosecutors.

Carolijn Terwindt is Senior Legal Advisor on Business and Human Rights at the European Center for Constitutional and Human Rights in Berlin. She has contributed articles to numerous journals and is the co-author with Chris van der Borgh of NGOs under Pressure in Partial Democracies (Palgrave Macmillan, 2014).

Series Preface
Preface
Acknowledgments
Abbreviations
1. Introduction
PART I: LAW, POLITICS AND LEGITIMACY IN LIBERAL DEMOCRACIES
2. When Groups Take Justice into Their Own Hands
3. The Prosecutorial Narrative and the Double Bind of Liberal Legalism
4. Mobilizing the Power of Victimhood
5. Challenging the State’s Crime Definition
PART II: WHEN PROSECUTORS RESPOND: NARRATIVES IN ACTION
ETA cases in Spain
6. Casting the Net Wider by Calling the Armed Group a Network 112
7. Narrating Praise for ETA Prisoners as Humiliation of Victims
“Mapuche conflict” cases in Chile
8. Vacillating between Criminalization and Negotiation
9. Responding to Allegations of Racism and Repression against the Mapuche People
“Eco-terrorism” cases in the United States
10. Shifting from Reactive to Proactive Prosecutions
11. Drawing a Boundary between Raising Awareness and Intimidation
12. Conclusion: The Prosecutor’s Contested Claim to Criminal Justice
References
Interviews
Trial Transcripts
Index